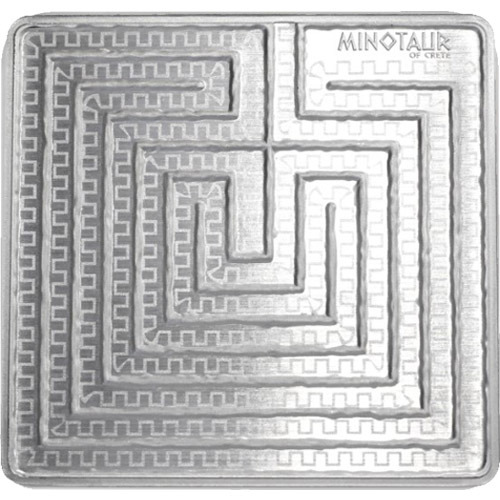 The story of the Minotaur and the Labyrinth in Crete is one of the most well-known from Ancient Greek mythology. It is said that Daedalus built the Labyrinth for King Minos of Crete, but upon its completion, he was imprisoned within the Labyrinth by King Minos. Daedalus had exercised so much skill in building the Labyrinth that he could barely escape his own creation. In the end, he was only able to get out of the maze using wings he fashioned from feathers and wax.

Within the Labyrinth, King Minos housed the fearsome Minotaur. The Minotaur was a half-man, half-bull creature that was born of a relationship between the wife of King Minos and a white bull gifted to him by the sea god Poseidon. Following wars with the Athenians, King Minos commanded seven young men and seven maidens be sent to Crete as sacrifices for the bull within the Labyrinth. Only the hero Theseus was able to break this repetitive sacrifice by slaying the Minotaur.

The obverse side of 2021 1.5 oz Silver Solomon Islands Minotaur Labyrinth Coins comes with an effigy of Queen Elizabeth II at the center. In the background field, there is an artistic depiction of Theseus in his Athenian armor as he battles the Minotaur. The unique serial number of the coin is found on this side.

The reverse side of the coin also includes a unique red ball that is interactive. As you move the coin around in your hand, the ball moves through the Labyrinth. This inclusion is a nod to the classical story of Theseus’ survival in the Labyrinth. It was said that he survived the Labyrinth by not only defeating the Minotaur, but using a red ball of string to chart his course into the heart of the Labyrinth so he could find his way back out.

2021 1.5 oz Silver Solomon Islands Minotaur Labyrinth Coins are set in capsules with a custom presentation box. The box houses the coin in a velvet-lined setting with graphic art on the cover reflective of the obverse background field.

Silver.com customer service is available at 888-989-7223 to answer your questions about silver for sale. You can also chat with us live online or email us directly.