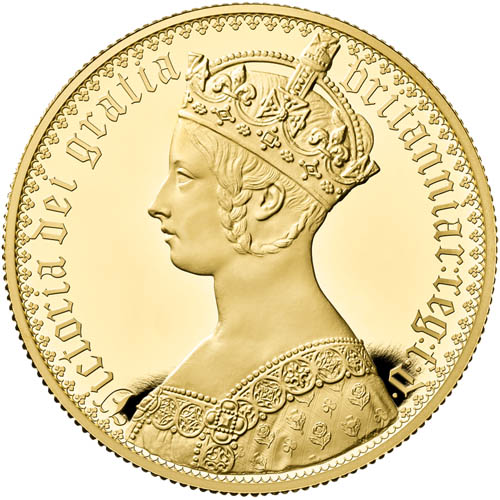 In 1847, Queen Victoria requested that Royal Mint engraver William Wyon design a new coin for her 10th anniversary on the throne. Her Majesty was close with Wyon thanks to his Young Head portrait from 1838 and hoped that he might duplicate his past success with this new coin. Wyon did not disappoint. With the help of Scottish artist William Dyce, he produced what is now known as the Gothic Crown. To celebrate this design, the Royal Mint has created a replica version of this coin as part of the Great Engravers series. Today, 2021 2 oz Proof Gold British Gold Gothic Crown Portrait Coins are available online at Silver.com.

The Great Engravers series is now in its third release of coins inspired by classic historical designs. Previous entries in the collection included William Wyon’s Una and the Lion and Three Graces designs. Wyon, who is considered one of the greatest engravers of all time, is honored once again for the third release. The Gothic Crown coin he engraved in 1846 for release in 1847 is consistently ranked at the top of lists for the greatest coin designs of all time. It is inspired by the Gothic Revival of the 19th century and features a stunning, highly detailed portrait of Queen Victoria on the reverse side. That portrait is replicated in this remarkable new coin from the Royal Mint.

All 2021 2 oz Proof British Gold Gothic Crown Portrait Coins are housed inside stunning display boxes that include a Certificate of Authenticity. The Royal Mint has also produced an information booklet with historical details about the Gothic Crown coin. This booklet is included in each purchase.

On the obverse of 2021 Proof Gold British Gold Gothic Crown Portrait Coins is a portrait of Queen Elizabeth. Her Majesty is depicted facing the right direction and is wearing the George IV State Diadem. This is the same crown she wore on her coronation in 1953. Inscriptions of the coin’s hallmarks are shown along the edges.

The reverse field of 2021 British Gold Gothic Crown Portrait Coins contains a replica of Wyon’s 1847 Queen Victoria portrait. Wearing the St. Edward’s Crown, the Queen is depicted in left-profile relief. Her dress is decorated with the four flowers of the United Kingdom and along the edge Latin inscriptions can be found.

Please contact Silver.com with your questions about gold for sale. Our team is available at 888-989-7223, online through our live chat, and via our email address.