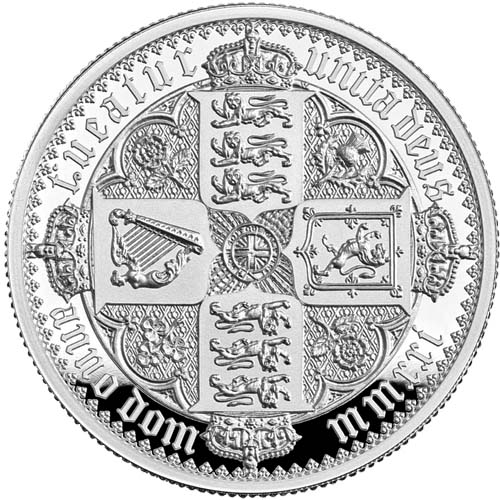 The Great Engravers series is a collection from the Royal Mint in honor of legendary coin designs throughout history. The first two coins in the series featured William Wyon’s Una and the Lion and Three Graces designs. Wyon’s work appears again in the third release, which depicts the 1847 Gothic Crown. Now, 2021 2 oz Proof Silver British Gothic Crown Quartered Arms Coins are available to you for purchase online at Silver.com.

Upon the request of Queen Victoria, Royal Mint engraver William Wyon set out to make a new coin in honor of Her Majesty’s 10th anniversary on the throne. While Wyon worked on a variation of his famous Young Head portrait, he petitioned the help of Scottish artist William Dyce for the reverse design. Dyce, inspired by the Neo-Gothic artistic movement of the day, created the elaborate Gothic Crown cruciform image. It is a true marvel to look at and remains without a doubt one of the finest coins ever struck at the Royal Mint.

These 2021 2 oz Silver British Gothic Crown Quartered Arms Coins have been carefully packaged inside beautiful presentation boxes. Each coin also comes with an information booklet and a Certificate of Authenticity from the Royal Mint. A new generation of coin enthusiasts now has the chance to appreciate the iconic Gothic Crown design like never before.

The obverse side of 2021 Proof Silver British Gothic Crown Quartered Arms Coins features Queen Elizabeth II. Jody Clark designed this effigy of the Queen in 2015. It represents the fifth overall portrait of Her Majesty created for coinage. Across the rim you will find the Queen’s name along with the coin’s denomination and year of issue.

On the reverse of 2021 British Gothic Crown Quartered Arms Coins is a recreation of the original Gothic Crown from 1847. The Royal Mint has closely adhered to the original, which depicts a cruciform with the Order of the Garter arms in its center. Included in the design are the official flowers of the United Kingdom and Blackletter Latin lettering across the border.

Silver.com customer service is available at 888-989-7223 to assist with questions about silver for sale. We are also available online using our live chat and email address features.