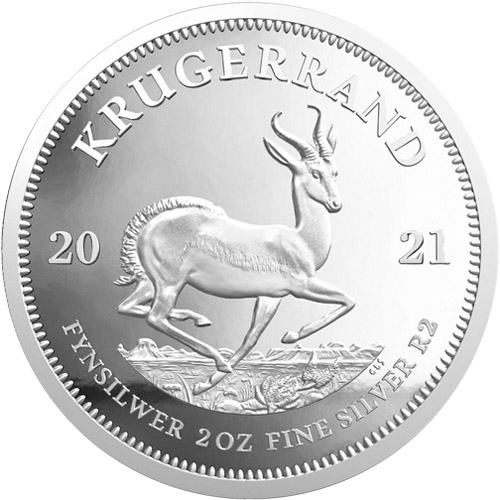 The obverse of 2021 2 oz Proof Silver South African Krugerrands includes the well-known portrait of Paul Kruger. An influential backer of the Boer cause in South Africa, Kruger was a strong voice for the independence of the South African Republic. His last name, Kruger, was combined with the modern fiat currency of South Africa, the Rand, in forming the name for this popular gold and silver bullion series.

On the reverse side of 2021 2 oz Proof Silver Krugerrands is an image of the Springbok antelope. Native to South Africa and neighboring nations in southern Africa, the Springbok is the official animal of the modern Republic of South Africa.

These 2021 2 oz Proof Silver South African Krugerrands arrive with a capsule around the coin. The coin is presented inside of a black display case with an included Certificate of Authenticity. As a proof coin, each one boasts impressive contrast between the frosted design strike and the mirrored field.

Silver.com customer service can assist you at 888-989-7223. You can also connect with us online using our live chat and email address features.