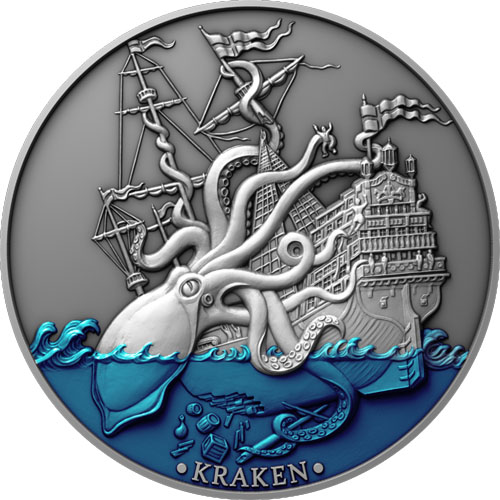 Of all the fantastical mythical beasts said to haunt the ocean, none are more frightening than the Kraken. According to Nordic folklore, the Kraken rises from the sea and yanks sailors from their ships using its squid-like tentacles. If you manage to escape these, the whirlpool formed by the Kraken’s emergence will likely subsume you. Now, 2021 2 oz Silver Antique Colorized Niue Mythical Creatures Kraken Coins are available to you for purchase online from Silver.com.

2021 2 oz Silver Antique Colorized Niue Kraken Coins are the perfect gift idea for anyone fascinated by sea creatures and classic myths! Not only does the coin feature exquisite design and attention to detail, but it also comes with a unique presentation box. Included in the box are the coin and a Certificate of Authenticity issued by the Lithuanian Mint. But only 500 of these beautiful specimens were minted worldwide, so hurry while supplies last!

While many know the Kraken from movies, bottles of rum, and a famous Alfred Lord Tennyson poem, this creature actually has its origin in ancient Nordic myths. In these tales, the Kraken is said to be so large that sailors often mistook it for an island. Initial accounts described the Kraken as resembling a giant crab, but by the 19th century, it became more defined as having octopus or squid-like features. Regardless of how it’s depicted, since its origin, no sea creature has caused more intimidation and fear. For any ship setting sail between Norway and Greenland, the message was loud and clear. Beware the Kraken!

2021 2 oz Silver Antique Colorized Niue Kraken Coins depict the public seal of Niue on the reverse. Surrounding this is a quadrant that depicts the four different characters in the Mythical Creatures series. Besides the Kraken, we also get a look at the Labyrinth of the Minotaur, Sirens, and the Harpy’s Nest.

The Kraken is shown on the reverse side of 2021 2 oz Silver Niue Mythical Creatures Kraken Coins. This fearsome monster is depicted wrapping its giant arms around a ship. One of its tentacle-like arms also clutches a terrified sailor. This stunning artistic rendering includes a colorized depiction of the water that brings contrast to the dramatic imagery. At the bottom of the coin are the words The Kraken.

Silver.com customer service is available to assist you with questions about silver for sale at 888-989-7223. We are also available online using our live chat and email address features.