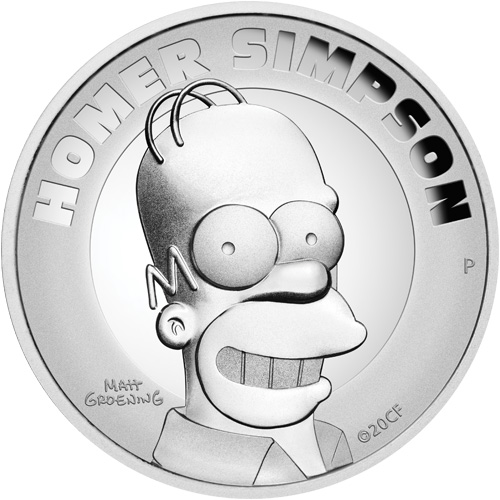 Since 1987, The Simpsons have been entertaining children, teens, and adults across the United States, and in fact, around the world. What started out that year as a 30-second animated short quickly grew into a 30-minute animated series. As of 1989, The Simpsons has been on the air each fall with new episodes to delight new generations of children and teens. Now, 2021 2 oz Silver Tuvalu Homer Simpson High Relief Coins are available to you for purchase online at Silver.com.

The Simpson family was first introduced to TV viewers in the United States in 1987. The yellow cartoon family first debuted on the Tracey Ullman Show in 1987 and would continue in the series for two years. In 1989, the popularity of the animated shorts resulted in 30-minute television series being developed and produced by FOX.

Today, you would struggle to find someone who isn’t at least aware of The Simpsons. The show has been broadcast in over 60 countries around the world and translated into 20 different languages. Among the milestones the animated series has crossed was the moment in 2018 when it became the longest-running primetime scripted show in TV history.

On the obverse side of 2021 2 oz Silver Tuvalu Homer Simpson High Relief Coins is a depiction of Queen Elizabeth II, the longest-reigning monarch of England. The effigy of the Queen shown here is the fourth-generation portrait from the Royal Mint of England and was designed in 1998 by Ian Rank-Broadley.

The reverse field of the 2021 Silver Tuvalu Homer Simpson High Relief Coins includes a front-facing, smiling effigy of Homer Simpson. Known in full as Homer Jay Simpson, he is depicted here with a happy grin on his face as he glares straight forward at the viewer. Both sides of the coin have high-relief strikes, creating 3D visuals on the design element and deeper fields for the background.

These 2021 2 oz Silver Tuvalu Homer Simpson High Relief Coins are available to you with beautiful presentation packaging. The coins are housed in clear Perspex cases showing both the obverse and reverse designs at the same time. The coins and the Perspex cases are housed together in a themed Simpsons shipper with a Certificate of Authenticity included.

Silver.com customer service is available to assist you with questions about silver for sale at 888-989-7223. Alternatively, you can chat with us live online through our chat service and email address features.