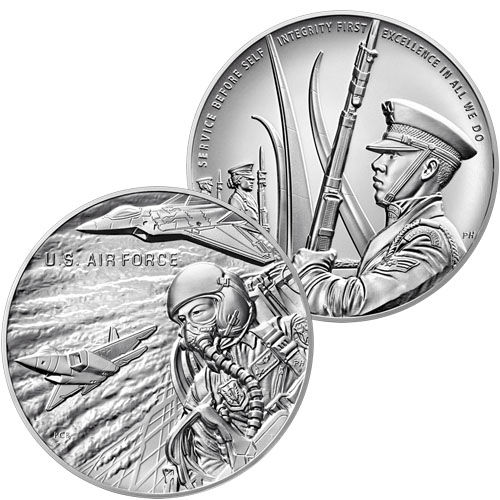 The obverse side of the 2021 2.5 oz Silver US Mint Air Force Medal features a depiction of US Air Force fighters. In the foreground, you will notice the image of a pilot within the cockpit of an Air Force fighter. In the background, there are F-22 fighters flashing across the sky.

These 2021 2.5 oz Silver US Mint Air Force Medals are available to you for purchase with presentation packaging. The US Mint houses the medals in capsules with a US Mint presentation box and an outer shipping sleeve. A Certificate of Authenticity is available with purchase as well.

Silver.com customer service is available to you at 888-989-7223 when you have questions about silver for sale. We are also available to you online through our live chat and email address features.