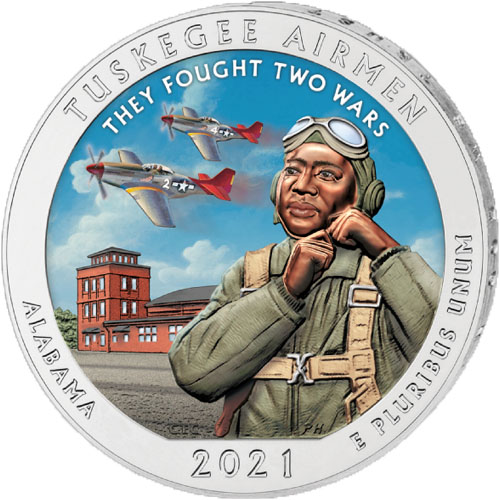 The final coin issued in the Silver ATB Series at the United States Mint was released on behalf of Alabama and reflects the historical significance of the Tuskegee Airmen National Historic Site. Located at Moton Field in Tuskegee, Alabama, this vital historic site in the United States pays tribute to the African-American pilots who trained to fight for the United States during World War II. Now, 2021 5 oz Colorized Silver ATB Tuskegee Airmen National Historic Site Coins are available to you for purchase online from Silver.com.

In 2010, the United States Mint introduced the 5 oz silver bullion coins of the America the Beautiful Series. This collection celebrates the 50 states, five territories, and federal district of the United States of America. Each jurisdiction is represented by a different site, with representative sites issued in order of age from oldest to newest.

Located at Moton Field in Tuskegee Alabama, the Tuskegee Airmen National Historic Site celebrates the location where thousands of African-American pilots learned to fly fighter planes for the United States Army Air Corps during World War II. Countless graduates of this training school would go on to distinguish themselves in the skies over both the European and Pacific Theaters of the war.

The obverse of 2021 Colorized Silver ATB Tuskegee Airmen National Historic Site Coins comes with a depiction of President George Washington. This left-profile relief was created in 1932 by John Flanagan for use on the quarter in honor of the 200th anniversary of Washington’s birth.

On the reverse side of 2021 5 oz Colorized ATB Tuskegee Airmen Coins is an image of a pilot in training. He is strapping on his helmet and getting ready for a flight as two P-51 Mustangs fly overhead. This field has the colorization that’s been added to the coin, with real-world colors for everything from the sky in the background and the planes overhead to the outfit worn by the trainee.

These 2021 5 oz Colorized Silver ATB Tuskegee Airmen National Historic Site Coins are available to purchase with plastic capsules. Each silver coin for sale is a Brilliant Uncirculated specimen with the aforementioned colorization added to the reverse.