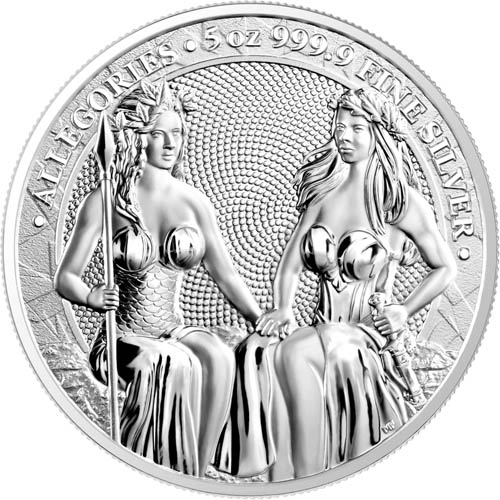 In The Allegories Series, the Germania Mint features the female personification of the German people alongside other female allegories from across Europe and even into the New World. In the latest release of the series, she is featured alongside an allegory that undoubtedly has the closest cultural ties to her own people. Now, 2021 5 oz Silver Germania The Allegories Austria & Germania Rounds are available to you for purchase online from Silver.com.

From the early 9th century AD onward, the people of Germany and Austria were inextricably linked by the rule of the Holy Roman Empire. Following the fall of the Roman Empire and the scourge of the Dark Ages in the centuries afterward, a new power rose in Central Europe: The Holy Roman Empire.

The rulers of the Holy Roman Empire were traditionally chosen by German prince-electors and the Pope, head of the Catholic Church, would crown the chosen nobleman as the Holy Roman Emperor. The Holy Roman Empire reigned over much of central Europe until its dissolution in 1806. Throughout all of this, Germany and Austria remained together as a part of the empire. The German Confederation that followed maintained this union, but it was eventually broken by the formation of the separate German and Austro-Hungarian Empires.

The obverse of 2021 5 oz Silver Germania The Allegories Austria & Germania Rounds features the effigies of Germania and Austria. The two are seated next to one another holding hands, a symbol of the close cultural ties between the two people. Germania is on the right with the oak wreath on her head and her left hand on the Reichsschwert. Austria is found on the left with a laurel wreath on her head and her right hand clutching a spear.

On the reverse of 2021 Germania The Allegories Austria & Germania Rounds is the mint logo of the Germania Mint. The design shows a quartered shield topped by an imperial crown with an oak wreath flanking the design.

These 2021 5 oz Silver Germania The Allegories Austria & Germania Rounds are available to you new from the mint in 2021 with individual plastic capsules for delivery.

Silver.com customer service is available at 888-989-7223 for assistance when you buy silver online. Alternatively, you can chat with us live online or email us directly.