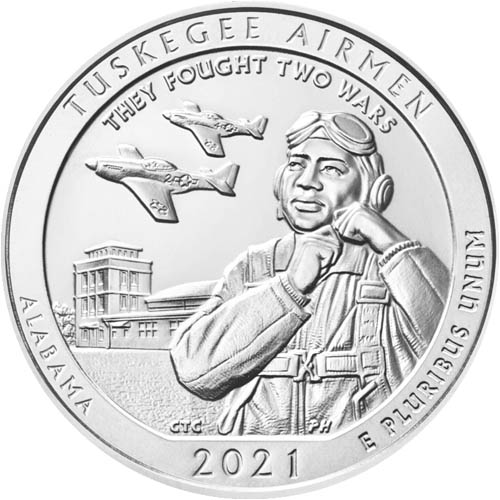 The silver coins for sale in the America the Beautiful Series are nearing an end. The ATB program comes with 56 designs issued between 2010 and 2021. From 2010 to 2020, the US Mint issued five designs in each date mark. This makes the 2021 release with just one design the only coin release in the series to feature alone in its release schedule. Today, 2021 5 oz Silver ATB Tuskegee Airmen National Historic Site Coins are available to you online at Silver.com.

America the Beautiful Silver Coins from the United States Mint are issued in the order of each site’s designation as a federally protected location by the US government. For example, the 2010 debut of the series with the Hot Springs National Park was chosen first because the land that now constitutes the National Park was first set aside as protected land in April 1832, 40 years before the next-oldest protected land in the United States. Comparatively speaking, the Tuskegee Airmen National Historic Site was only designated as federally protected in November 1998.

All of the 2021 5 oz Silver ATB Tuskegee Airmen National Historic Site Coins are available to you in Brilliant Uncirculated condition. The coins are housed individually inside of capsules, while multiples of 10 and 100 come in original US Mint packaging. This includes acrylic tubes of 10 coins or Monster Boxes of 100 coins.

President George Washington is found on the obverse side of all 2021 Silver ATB Tuskegee Airmen National Historic Site Coins. This left-profile bust of the nation’s first president was designed in 1932 by John Flanagan and placed on the circulation US quarter in honor of the 200th anniversary of President Washington’s birth.

Please don’t hesitate to contact Silver.com if you have any questions about the coins. You can call us on the phone at 888-989-7223, chat with us live online, or simply send us an email with your inquiries.