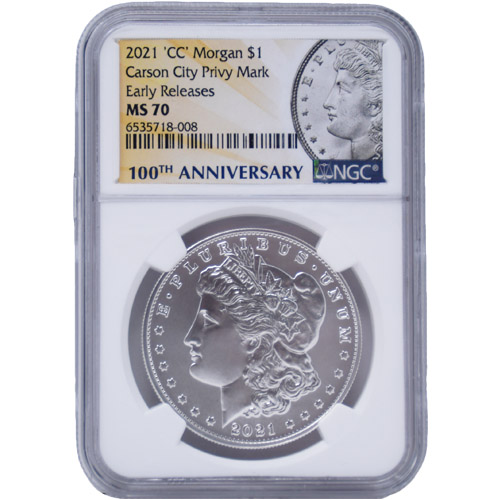 When the United States Mint launched the Silver Morgan Dollar in 1878, there were three branch mints involved in the production of the coins. One of these was the Carson City Mint located in the state of Nevada. The mint issued Silver Morgans from 1878 to 1885, paused for three years, and then resumed coining in 1889 for a further four years, ending its production of the coins in 1893 when the mint closed. The Carson City Mint always issued Silver Morgans with a CC mint mark on the reverse.

All 2021 CC Privy Silver Morgan Dollars available here come in perfect condition. Mint State 70 coins are those with full, original mint luster and no minor detracting flaws. Coins with an Early Release label were received by the NGC within 30 days of release to be graded.

On the obverse of 2021 CC Privy Silver Morgan Dollars is George T. Morgan’s depiction of Lady Liberty. This left-profile portrait of Liberty comes with both a coronet and a wreath crown in her hair. Anna Willess Williams was the model who sat for Morgan to serve as inspiration for his image of Liberty.

The reverse side of 2021 CC Privy Silver Morgan Dollar Coins features another design from Morgan. Here, his version of the heraldic eagle is found on the coins. The eagle is set in front-facing relief as it clutches the arrows of war and the olive branch of peace. The bird is flanked below by a wreath of oak and laurel. The Carson City Mint honorary mint mark appears beneath the center of the wreath and is shown as a simple CC inside a small oval.

Please feel free to reach out to Silver.com if you have any questions when buying silver. Our team is available at 888-989-7223, online using our live chat, and via our email address.