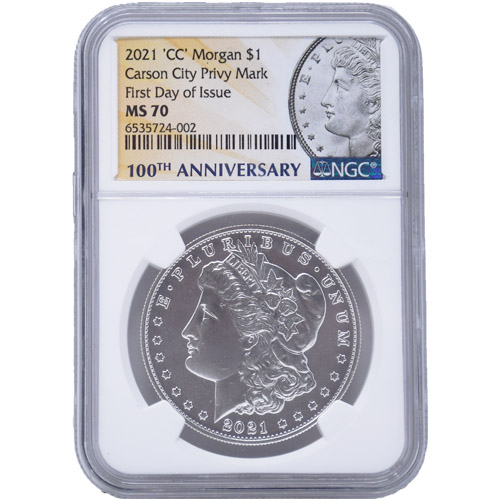 Obverse design elements on 2021 CC Privy Silver Morgan Dollars feature a portrait of Liberty. Designed by George T. Morgan, the image shows Liberty in left-profile relief wearing both a laurel wreath and a coronet crown on her head. There are 13 stars on this side of the coin and a date mark.

Reverse visuals on the 2021 Silver Morgan Dollar Coins come with a depiction of the heraldic eagle. Also designed by Morgan, this image shows the American bald eagle in front-facing relief as it clutches the arrows of war and the olive branch of peace. Struck by the Philadelphia Mint in 2021, these coins have an honorary CC privy mark on the reverse to celebrate the role of the Carson City Mint in producing the coins in the 19th century.

These 2021 CC Privy Silver Morgan Dollar Coins are available to you for purchase online in perfect condition. The Mint State 70 certification means the coins showcase full, original mint luster and have no detractions. The First Day of Issue is available for coins that were received for grading within 24 hours of release from the mint.