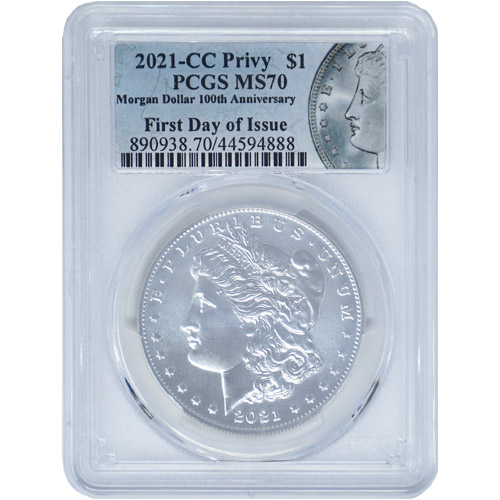 The Silver Morgan Dollar was released by the United States Mint for 27 years, 26 of which were consecutive. From 1878 to 1904, the coins were issued annually by the Philadelphia Mint, San Francisco Mint, and the Carson City Mint, with the New Orleans Mint starting production in 1879 and continuing through 1904. In 1921, the US Mint issued the coins one final time. 2021 marks the centennial of this release and the United States Mint offered five versions of the coin to honor the five mints that first struck the coins. Today, 2021 CC Privy Silver Morgan Dollars in perfect condition are available to you online at Silver.com.

All of these 2021 CC Privy Silver Morgan Dollars are available in perfect condition. Mint State 70 coins have full, original mint luster and no detracting flaws. These coins also have a First Day of Issue label, indicating that each one was received within 24 days of issue by the PCGS for certification.

On the obverse side of 2021 CC Privy Silver Morgan Dollars is a left-profile bust of Liberty. This portrait of Lady Liberty was created for this series by George T. Morgan and shows Liberty wearing a coronet crown and the laurel wreath. There are 13 stars on this side and inscriptions of the motto E PLURIBUS UNUM and a date mark.

The reverse field of the 2021 CC Privy Silver Morgan Dollar Coins features an image of the heraldic eagle. The heraldic eagle of the United States was first designed in 1794 and was redesigned for this series in 1878 by Morgan. It shows a bald eagle in front-facing relief with the arrows of war in one talon and the olive branch of peace in the other.

Please contact Silver.com with questions when you buy silver. You can call us at 888-989-7223, chat with us live online, or email us directly.