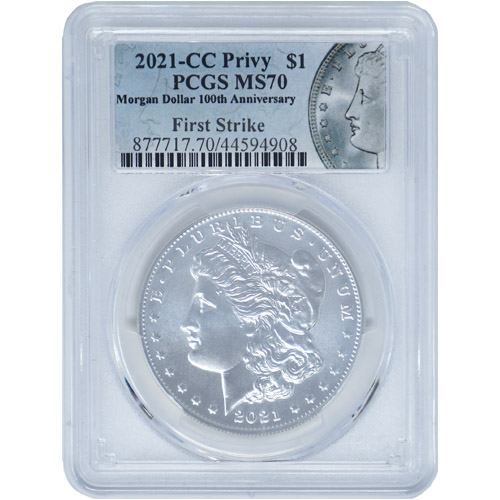 The Silver Morgan Dollars were issued by the United States Mint from 1878 to 1904 and again in 1921. The final release in 1921 was celebrated by the United States Mint on its centennial date in 1921. The US Mint released five different versions of silver for sale to honor the five branch mints that issued the coins in the 19th and 20th centuries. Right now, 2021 CC Privy Silver Morgan Dollars are available to purchase online at Silver.com in perfect condition.

Each of the 2021 CC Privy Silver Morgan Dollars in this listing comes to you with a perfect certification from the PCGS. The Mint State 70 grade means that each coin exhibits full, original mint luster with no detracting flaws of any kind. The First Strike designation indicates a coin received by the PCGS within 30 days of release from the mint. These commemorative Silver Morgan Dollars are a product of the Philadelphia Mint and come with a CC privy mark on the reverse field.

The obverse of these 2021 CC Privy Silver Morgan Dollars features an effigy of Liberty. George T. Morgan created this portrait of Liberty with Anna Willess Williams sitting as his model for the head of the female allegory. Liberty wears a laurel wreath and a coronet on her head in this design.

On the reverse side of 2021 CC Privy Silver Morgan Dollar Coins is a depiction of the heraldic eagle of the United States. The design features a front-facing bald eagle with its head looking to the left, the same side as the olive branch it is clutching in its talons. The other set of talons is clutching the arrows of war.