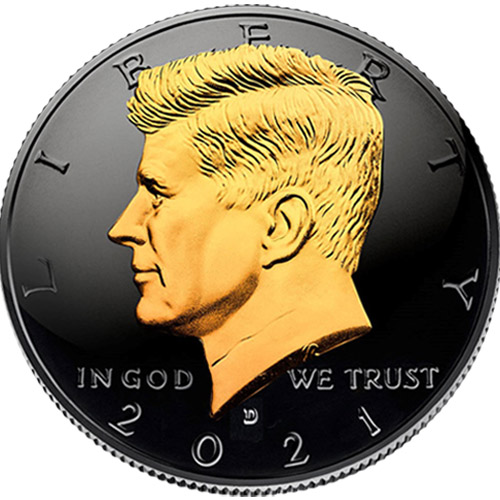 Introduced in 1964, the Kennedy Half Dollar Coin is the eighth design in the US 50-cent piece series and is the current design. While other design changes in American coining history underwent months of consideration as numerous designs were compared for worthiness on American coinage, the Kennedy Half Dollar design represented one of the quickest turnarounds in American history. Now, 2021-D JFK Black Ruthenium Half Dollar Gold Clad Coins are available to you for purchase online at Silver.com.

The JFK Half Dollar is the eighth design series in the collection dating back to its 1794 debut. The half dollar is one of the few American denominations issued on an annual basis dating back to the era of the nation’s founding. The first several decades saw various design changes between the Flowing Hair bust (1794-1795), the Draped Bust (1976-1807), and the Capped Bust (1807-1838).

In 1839, the Seated Liberty design debuted and would feature on the coins for 52 years until 1891. Starting in 1892, the Barber Coinage design debuted. That was replaced in 1916 by Walking Liberty, arguably the most famous design. In 1948, the Franklin Half Dollar was introduced, but was soon replaced by the Kennedy Half Dollar design following the assassination of President John F. Kennedy in 1963. The Kennedy Half Dollar design was approved two months after his death and first released just four months after his death. As of 2017, it is now the longest-running design having surpassed the Seated Liberty image.

President John F. Kennedy is found on the obverse of the 2021-D JFK Black Ruthenium Half Dollar Gold Clad Coins. The left-profile portrait was created by Gilroy Roberts, the 9th Chief Engraver of the United States Mint.

A modified version of the US Presidential Seal is depicted in the reverse design of 2021-D JFK Black Ruthenium Half Dollars. This design was created by Frank Gasparro, the man who would replace Roberts in 1965 to become the 10th Chief Engraver of the United States Mint.

These 2021-D JFK Black Ruthenium Half Dollar Gold Clad Coins have stunning black ruthenium plating on the entire obverse and reverse background fields, with brilliant 24-karat gold plating on the bust of President Kennedy and the American bald eagle. The coins are packaged in acrylic capsules with a small display for each coin and capsule, and come with a Certificate of Authenticity.

Silver.com customer service is here to assist you at 888-989-7223. We are also available online using our live chat and email address features.