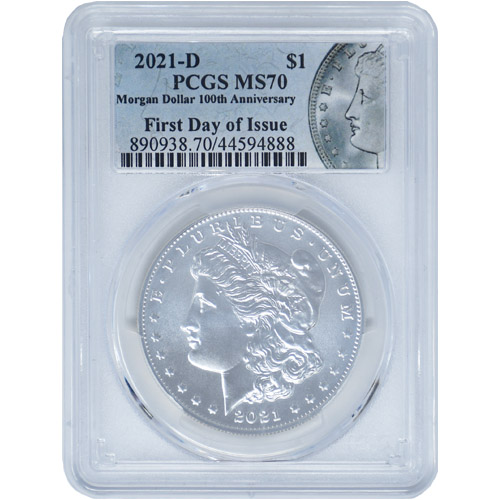 When the United States Mint introduced the Silver Morgan Dollars again in 1921, two of the four original mints that had previously issued the coins were closed and the US Mint turned to one of its newest branch mints: the Denver Mint. Now, 2021-D Silver Morgan Dollar Coins are available to you for purchase online at Silver.com in perfect condition.

In 1878, the United States Mint resumed silver dollar coining after a five-year hiatus. Replacing the Seated Liberty design was the so-called Morgan Dollar design. Created by George T. Morgan, the new image of Lady Liberty and the heraldic eagle would go on to feature on US silver dollars for a total of 28 years.

The obverse side of 2021-D Silver Morgan Dollars features an effigy of Lady Liberty. This left-profile relief shows Liberty with a Phrygian cap, coronet crown, and a laurel wreath on her head. The field has 13 stars, with seven to the front of Liberty’s face and six behind her head.

On the reverse face of 2021-D Silver Morgan Dollars is an image of the heraldic eagle of the United States. The design shows the bald eagle in front-facing relief with its wings spread wide as its talons clutch the arrows of war and the olive branch of peace.

These 2021-D Silver Morgan Dollars are available to purchase in plastic slabs with an MS70 grade. Mint State 70 coins are perfect specimens that showcase full, original mint luster and no flaws. First Day of Issue coins are specimens received by the PCGS for grading within 24 hours of release from the mint.