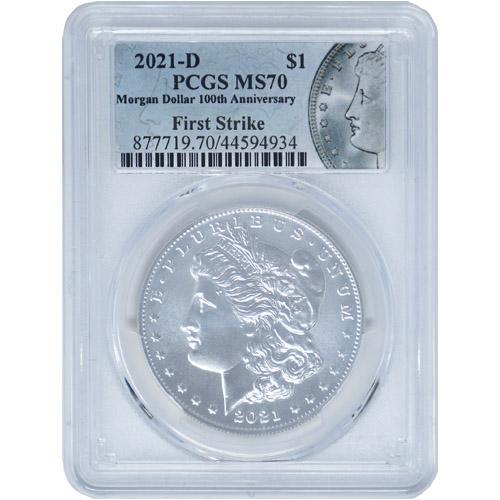 When the United States Mint resumed silver dollar production in 1921, three branch mints were available to strike coins for the renewed series. To relaunch silver dollar coining, the US Mint revived George T. Morgan’s 1878 images from the Silver Morgan Dollar. The Philadelphia Mint and San Francisco Mint resumed coining for the 28th time. In this 28th and final year, the Denver Mint also struck coins, but did so for the very first time. Now, 2021-D Silver Morgan Dollars in perfect condition are available to you for purchase online at Silver.com.

The Morgan Dollars from the United States Mint were introduced in 1878. The series ran continuously from 1878 to 1904 with no interruptions. During this period of time, the Philadelphia Mint and San Francisco Mint issued the coins every year. The New Orleans Mint began coining in 1879 and continued through 1904. The Carson City Mint had a disjointed production history that included releases from 1878 to 1885 and again from 1889 to 1893 when the mint closed.

During this period of time, the Denver Mint did not exist, although the US Mint did have a United States Assay Office in Denver. By 1906, this building had been upgraded with coining facilities and become the Denver Mint. However, the Morgan Dollars were no longer in production. In fact, no silver dollars were. In 1921, Morgan Dollar coining resumed, and the Carson City Mint and New Orleans Mint were both closed at this point. The new Denver Mint stepped in to provide production capacity for the new silver dollars.

The obverse of 2021-D Silver Morgan Dollars features Lady Liberty. Issued on the centennial of that final 1921 strike, the original effigy of Liberty in left-profile relief with a Phrygian cap, coronet crown, and laurel wreath on her head all feature in the design.

On the reverse of the 2021-D Silver Morgan Dollar Coins is a depiction of the heraldic eagle of the United States. The coins showcase a front-facing bald eagle with its wings spread as it clutches the arrows of war and the olive branch of peace.

These 2021-D Silver Morgan Dollars are available in Mint State 70 condition. Considered perfect specimens, each one has full, original mint luster and comes with no detractions. The First Strike indicator means the coins were received for grading within 30 days of release from the mint.

Silver.com customer service can assist you with questions when you buy silver online. Please call us at 888-989-7223, chat with us live online, or email us directly.