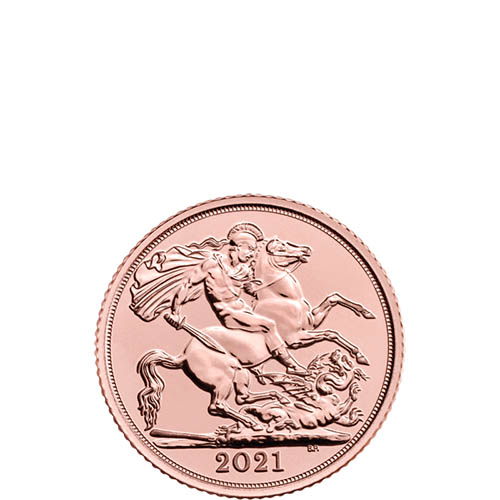 In 1817, the United Kingdom reintroduced one of its most famous gold coins. The English sovereign gold coin had previously been available from 1489 until the reign of King James I. During the reign of King George III, the Great Recoinage of 1816 in England saw the rebirth of the Gold Great Britain Sovereign. Available throughout most of its history, the 1/2 sovereign has been issued by the Royal Mint. Now, 2021 Gold Great Britain 1/2 Sovereigns are available to you for purchase online at Silver.com.

The obverse of 2021 Gold Great Britain 1/2 Sovereigns comes with an image of Queen Elizabeth II. Her Majesty is shown in this design with the George IV State Diadem Crown on her head. Designed by Jody Clark in 2015, this is the fifth-generation of the Queen to showcase on British coins during her reign and it depicts her at the age of 89.

On the reverse field of 2021 Gold Great Britain Sovereigns is a depiction of St. George on horseback that was created in 1817 by Benedetto Pistrucci. The design is based on the legend of St. George and the dragon, a myth that tells of St. George taming and then slaying a dragon that had demanded human sacrifices from a small kingdom.