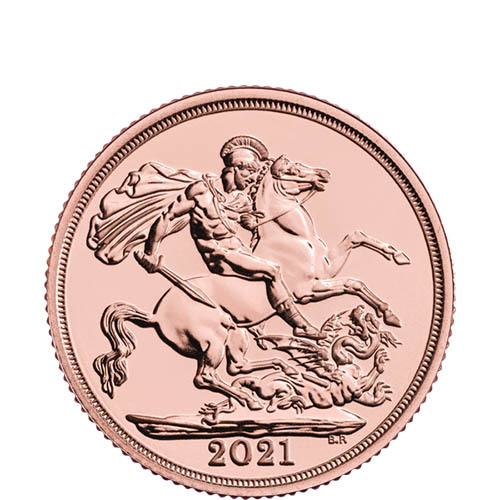 The Gold Sovereign from the Royal Mint of England has a long, rich history as an English circulation currency and a form of modern gold bullion for investors. Gold Sovereign coins are rooted in the introduction of the English gold sovereign during the reign of the Tudor monarch, King Henry VII. It was issued regularly until 1603 before being suspended by King James I of England. Today, 2021 Gold Great Britain Sovereigns are available to you online at Silver.com.

The designs on the Gold Great Britain Sovereign coins have remained constant in theme since the 1817 introduction of the collection. The reigning monarch is always featured on the obverse field of the coins, with designs including the busts of King George III, King George IV, Queen Victoria, King George V, and more recently, Queen Elizabeth II as of 1952. The reverse has, with the exception of select dates during Queen Victoria’s reign, always featured St. George slaying a dragon.

All of the 2021 Gold Great Britain Sovereigns in this product listing are available individually or in multiples. Single coins are available to purchase inside of individual plastic flips, while multiples are available in acrylic tubes of 25 coins from the Royal Mint of England. Each one of the coins comes in Brilliant Uncirculated condition.

Please don’t hesitate to reach out to Silver.com if you have any questions. You can call us on the phone at 888-989-7223, chat with us live online, or simply send us an email with your inquiries.