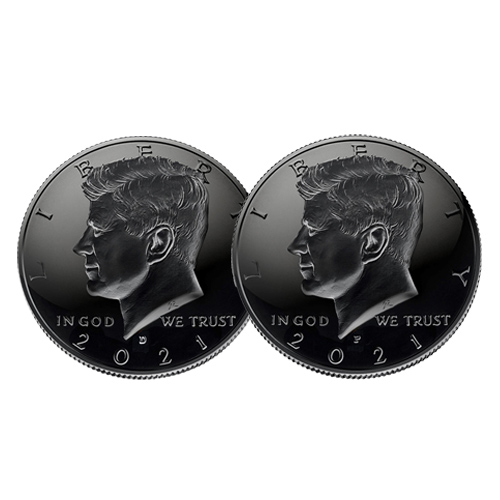 The vast majority of legal tender coins in production at the United States Mint and circulating in the economy have images rooted in designs released more than a half-century ago. The US dollar was the last circulation piece redesigned, that coming in 2009, but it is issued in such low figures each year it is rarely seen and used in commerce. Though the half dollar is not widely used in commerce either, its production levels are much higher than the dollar and its imagery is more than 55 years old. Today, 2021 JFK Half Dollar Black Ruthenium Coin Sets are available to you online at Silver.com.

The US half dollar has been in production since 1794 when the Flowing Hair design was used for the first two releases ever. The coins have gone through eight design elements including the 1964 Kennedy Half Dollar Series. Still in production today, the Kennedy Half Dollar is the largest coin from the US Mint by physical size, with a diameter that is more than 4 MM larger than that of the current US dollar coin.

All of the 2021 JFK Half Dollar Black Ruthenium Coin Sets are available to purchase with capsules for the individual coins. Each coin has its own capsule and its own display stand allowing you to stand the coins upright on display. The set comes with a Certificate of Authenticity. In this set, you receive two coins dated 2021, one with a “D” mint mark from the Denver Mint and the other with a “P” mint mark from the Philadelphia Mint.

On the obverse of 2021 JFK Half Dollar Coins is a depiction of President John F. Kennedy. His effigy here is set in left-profile relief and was actually approved by Kennedy himself before his death in 1962 for use on the Presidential Medal Series. It was adapted later on for the Kennedy Half Dollar in 1964.

The reverse side of the 2021 JFK Half Dollar Black Ruthenium Coins in this two-coin set come with the image of the modified Presidential Seal. This seal depicts the American bald eagle in front-facing relief with the arrows of war in one talon and the olive branch of peace in the other talon. Both sides of the coin have an impressive black ruthenium plating that covers both the background fields and the design elements.

Please contact Silver.com if you have any questions. Our team can assist you at 888-989-7223, chat with you live online, or correspond with you via email.