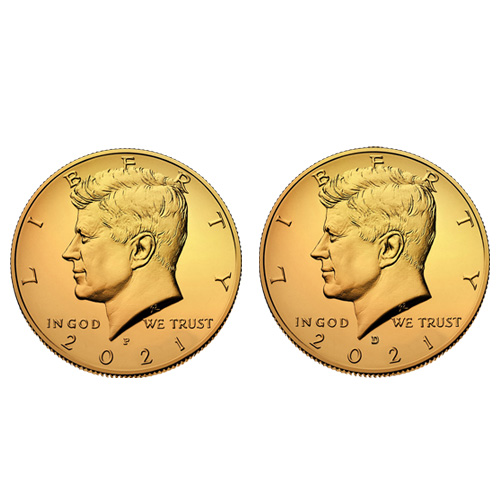 Introduced in 1964 by the United States Mint, the Kennedy Half Dollar is one of the most rapidly introduced American coin designs in the nation’s history. In the course of just four months, the US half dollar went from featuring an effigy of Benjamin Franklin and the Liberty Bell to bearing a portrait of President John F. Kennedy and the Presidential Seal. Right now, 2021 JFK Half Dollar Coin Sets with a gold-plated finish are available to purchase online at Silver.com.

Each of the 2021 JFK Half Dollar Coin Sets available in this listing at Silver.com with two coins in total. In the set, you will find one coin each from the Philadelphia Mint and the Denver Mint, each with its own distinctive mint mark. The coins are individually housed in acrylic capsules with an individual display for each coin. The small display stand allows you to put each coin on display upright inside of its capsule to show off the designs on both sides. A Certificate of Authenticity is available with the set.

The obverse of 2021 JFK Half Dollar Coins in this set features the left-profile portrait of President John F. Kennedy. On the reverse side of the 2021 JFK Half Dollars is a depiction of the modified Presidential Seal. Both sides of the coin come with a full application of 24-karat gold throughout the fields to enhance the visual brilliance.

If you have any questions about these coin sets, please don’t hesitate to ask. Silver.com customer service is available at 888-989-7223, online through our live chat, and via our email address.