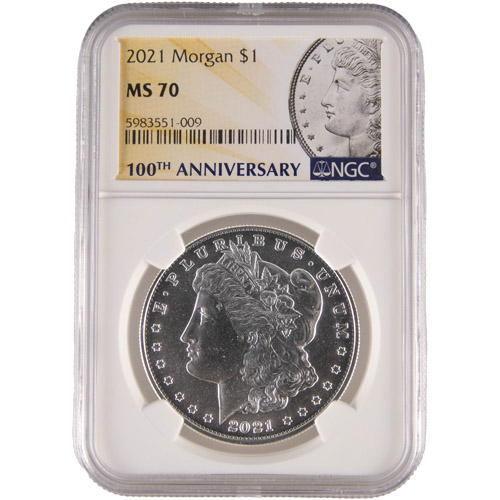 2021 marks the celebration of the Silver Morgan Dollars‘ centennial. These classic coins were first issued by the official mint of the United States from the years 1878 to 1904. Production did halt for a couple of decades, picking back up again in 1921 when the series officially resumed. The Philadelphia Mint, the producer of this coin, was actually one of the main Mint branches that struck coins for each date mark in the series. Currently, the 2021 Silver Morgan Dollar Coin NGC MS70 can be purchased online right here from Silver.com.

The 2021 Silver Morgan Dollar Coin NGC MS70 was struck in pure silver and reveals two amazing designs on the coin’s obverse and reverse. The Mint State (MS) 70 grading from the NGC means that the coin itself is considered a perfect specimen; it retains its full, original mint luster and has no flaws. Although this coin is considered a Philadelphia Mint Strike, there is no mint mark shown on the coin. Collectors everywhere will want to get their hands on this exclusive release!

The Philadelphia Mint is one of the main branches of the United States Mint system and is also one of the original locations that released Morgan Silver Dollar Coins in 1878. The U.S. Mint system is known for putting unique coin releases into the bullion world that are considered highly detailed and timeless. These coins are not just popular in America, but also around the world.

On the obverse of the 2021 Silver Morgan Dollar Coin NGC MS70 is the effigy of Lady Liberty. This image was designed by George T. Morgan and shows Liberty from her left profile. A laurel wreath sits atop her head. Around the edges of the coin are stars, and the date marking is also shown below the head of Liberty.

The reverse of the 2021 Silver Morgan Dollar Coin NGC MS70 shows the heraldic eagle designed by George T. Morgan. The bald eagle is shown from the front, holding arrows of war and the olive branch of peace. The image shows a great balance of elements and offers symbolism that represents American ideology well. The value of the coin is also shown on the reverse, along with the “UNITED STATES OF AMERICA” inscription.

If you have any additional questions, our team at Silver.com is here to help. We are available via email, online live chat, or by phone at 888-989-7223.