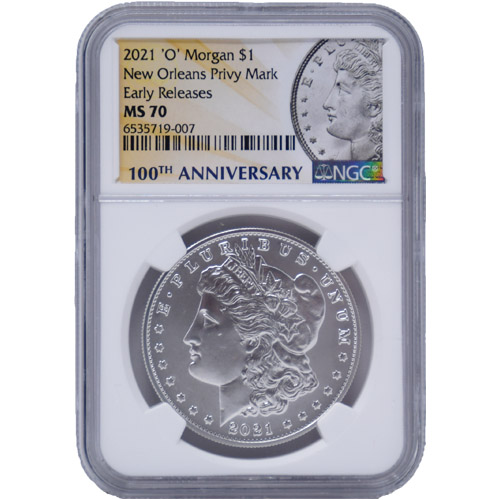 The New Orleans Mint opened in 1838 as the southern-most branch facility of the United States Mint. It opened alongside two purpose-built branch mints on the East Coast. The Charlotte Mint was built around the same time in North Carolina to take advantage of local sources of gold to produce gold coinage for the United States. The Dahlonega Mint was opened in Georgia specifically for gold coining and assaying.

From 1838 to 1861, the New Orleans Mint struck nearly every denomination and metal of US coinage available in the 19th century. It closed during the Civil War and Reconstruction, reopening in 1879 and continued operating until 1909 when it closed permanently. In its history, the New Orleans Mint issued more than 427 million gold and silver coins for the United States. This included Silver Morgan Dollars it produced between 1879 and 1904.

The obverse of these 2021 O Privy Silver Morgan Dollars features George T. Morgan’s original depiction of Liberty. This left-profile portrait of Liberty includes the laurel wreath and coronet crown on her head.

On the reverse side of 2021 O Privy Silver Morgan Dollar Coins is the heraldic eagle. Also designed by Morgan in 1878, it depicts the bald eagle as it clutches the arrows of war and the olive branch of peace.

These 2021 O Privy Silver Morgan Dollars are available in perfect condition. Mint State 70 coins showcase full, original mint luster and have no detractions present. The Early Release label means these specimens were received by the NGC within 30 days of release from the US Mint. These coins were struck at the Philadelphia Mint with a commemorative O privy mark on the reverse in honor of the New Orleans Mint.

Silver.com customer service is available at 888-989-7223. Alternatively, you can chat with us live online or simply send us an email with your inquiries.