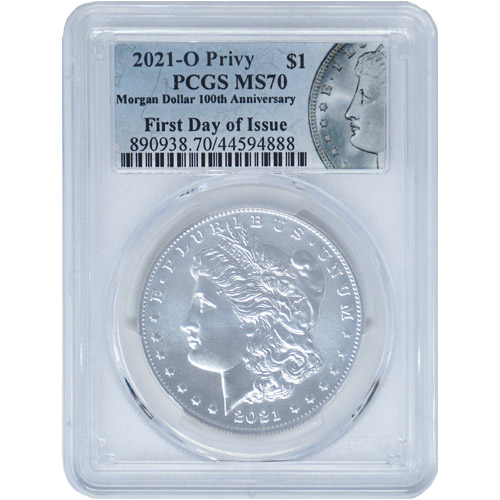 Silver Morgan Dollars were produced by the United States Mint from 1878 to 1904 and again, one final time, in 1921. During this period, five branch mints issued the coins. Two of those mints contributed to every date mark. One mint issued the coins only once in the 1921 release. The New Orleans Mint was one of the biggest contributors, missing out only in 1878 and 1921. Right now, 2021 O Privy Silver Morgan Dollars are available to purchase online at Silver.com in perfect condition.

Each 2021 O Privy Silver Morgan Dollar available here comes in perfect condition from the PCGS with a plastic slab for delivery. Mint State 70 coins exhibit full, original mint luster and present with no detractions of any kind. The First Day of Issue label means the coins were received for grading within 24 hours of release from the mint.

The New Orleans Mint was opened in 1838 and over the course of its 71-year history it would produce some 427 million gold and silver coins for the United States. It missed out on two years of production in the history of the Silver Morgan for varying reasons. The mint was closed from 1861 to 1878 during the US Civil War and the Reconstruction period, resulting in it missing the first release date. The mint closed permanently in 1909 and was not operational for the 1921 release.

The obverse of 2021 O Privy Silver Morgan Dollars comes with a portrait of Liberty from George T. Morgan. The left-profile portrait depicts Liberty with a laurel wreath and coronet crown in her hair, and the field includes 13 stars split seven in front of her face and six behind her head.

On the reverse of the 2021 O Privy Silver Morgan Dollar is a depiction of the heraldic eagle. This version of the heraldic eagle lacks the US national shield, but it does still feature the eagle in front-facing relief as it clutches the arrows of war and the olive branch of peace. Though the Philadelphia Mint issued these commemorative bullion pieces, the coins were struck with an O privy mark mimicking the historic New Orleans Mint mark to honor its role in coining Silver Morgan Dollars.

If you have any questions about silver for sale, Silver.com is here to help. Please call us at 888-989-7223, chat with us live online, or email us directly.