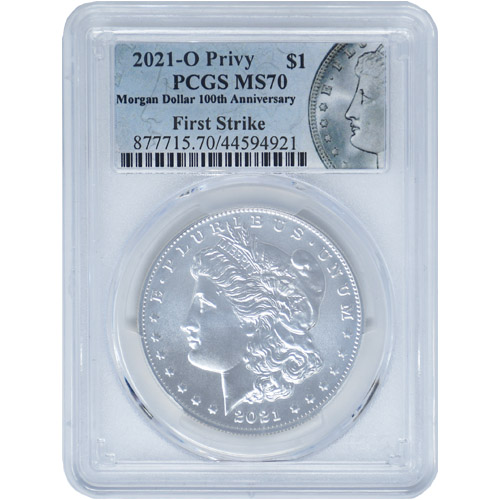 In 1835, the United States Mint and US Congress determined that the US Mint needed to expand its coining capacity beyond the Philadelphia Mint, its only location at the time. The Charlotte Mint was opened in North Carolina to take advantage of local gold deposits and was used to exclusively produce American gold coins. The Dahlonega Mint was opened in George for similar purposes.

The final of these three branch mints to open was the New Orleans Mint in Louisiana. New Orleans would operate from 1838 to 1861 and the outset of the US Civil War. It was taken over by the Confederacy and ceased to operate throughout the Civil War and during Reconstruction. When it resumed coining in 1879, it became a major supplier of Silver Morgan Dollars and would continue to do so until 1904 when the series ended.

Obverse designs on 2021 O Privy Silver Morgan Dollars is an effigy of Lady Liberty. This depiction of Liberty was created in 1878 by George T. Morgan and shows Liberty in left-profile relief.

Reverse visuals on 2021 O Privy Silver Morgan Dollar Coins include the heraldic eagle of the United States. The image shows an American bald eagle clutching the arrows of war and the olive branch of peace.

These 2021 O Privy Silver Morgan Dollar Coins are available to you in PCGS protective slabs and have Mint State 70 certifications. Coins in this condition showcase full, original mint luster and have no detractions. First Strike coins are those received for grading within 30 days of release from the mint.