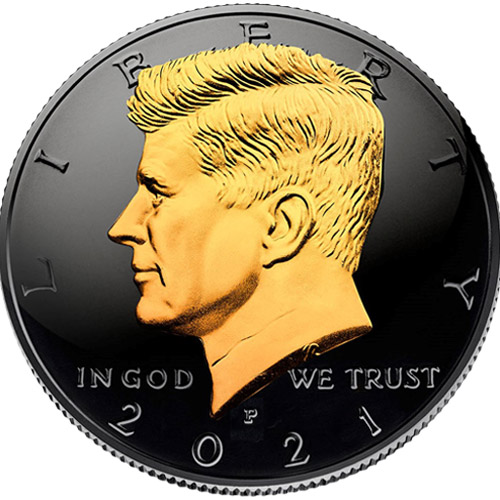 The half-dollar coin from the United States Mint is one of its longest-running denominations. Like many of the coins currently in circulation from the mint, the half dollar bears a design that has been in use for several decades without major alterations occurring. Introduced in 1964 as the Kennedy Half Dollar, the 50-cent piece is a popular coin among collectors when issued with modifications applied by private mints. Today, 2021-P JFK Black Ruthenium Half Dollar Gold Clad Coins are available online at Silver.com.

All of these 2021-P JFK Black Ruthenium Half Dollar Gold Clad Coins are available to you with presentation packaging. The coins are housed inside individual plastic capsules and come with display stands. You can stand the coin inside of its capsule upright in the display so both fields of the coin can be seen. Each coin also comes with a Certificate of Authenticity.

On the obverse side of 2021-P JFK Half Dollar Coins is a left-profile portrait of President John F. Kennedy. President Kennedy is the only former leader to showcase on American coins in a design that was approved by the individual. The designs the US Mint used had already been approved by President Kennedy earlier in his term in office for use on the Presidential Medal, with Kennedy giving the nod to the designs himself.

The reverse face of the 2021-P JFK Black Ruthenium Half Dollars comes with a modified version of the Presidential Seal. This seal depicts the American bald eagle in support of the US national shield with an olive branch of peace in one talon and the arrows of war in the other talon. Both sides of the coin have a black ruthenium background plating and a clad layer of 24-karat gold on the bust of Kennedy and the eagle.