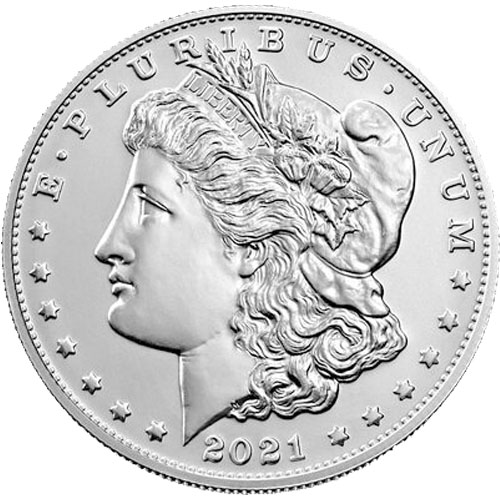 Each 2021 (P) Silver Morgan Dollar available here comes with beautiful presentation packaging from the United States Mint. The silver coins for sale are housed in protective capsules and set within black presentation boxes. A Certificate of Authenticity from the US Mint is available with your purchase as well. Though no mint marks are present, these specimens are known to come from the Philadelphia Mint.

After a 17-year hiatus in coining, the Silver Morgan Dollar resumed production in 1921 for one final year as silver dollar coining resumed in the United States. The Morgan Dollar design was used through December 1921 when it was replaced by the Peace Dollar design. Only three mints struck the coins in 1921: Philadelphia, San Francisco, and Denver. This ensured that Philadelphia struck the Silver Morgan Dollars every year the US Mint issued them. With 44.69 million coins issued at Philadelphia in 1921, the US Mint set a single-year, single-mint record for coining in the series.

Lady Liberty is found on the obverse of 2021 (P) Silver Morgan Dollars. This design from George T. Morgan was created in 1878 with Anna Willess Williams sitting through several portrait sessions with Morgan to help inspire the image. There are 13 stars around the effigy of Liberty.

In the reverse design of the 2021 (P) Silver Morgan Dollar is a depiction of the heraldic eagle of the United States. This 19th-century version of the national emblem was also created by Morgan and featured a front-facing bald eagle with the arrows of war and the olive branch of peace in its talons. The image of the heraldic eagle is framed by a wreath.

If you have any questions, Silver.com customer service is here to help. Please call us on the phone at 888-989-7223, online using our live chat feature, and via our email address.