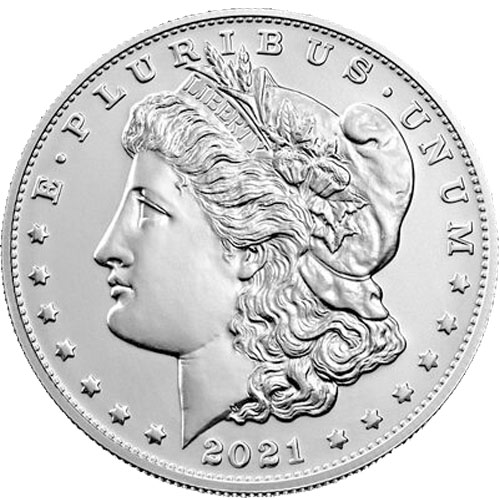 In 1878, the United States Mint resumed silver dollar coining following the Fourth Coinage Act in 1873. The re-release of silver dollars resulted in a new design, one that was created by a new assistant engraver at the United States Mint, George T. Morgan. When production of the coins began in 1878, the existing Philadelphia, Carson City, and San Francisco Mints struck the coins. In 1879, when the New Orleans Mint resumed coining operations, it too began striking Silver Morgan Dollars.

The New Orleans Mint originally opened in 1838 and remained operational until 1861 and the outset of the US Civil War. It remained closed throughout the Civil War and the Reconstruction era. In 1879, it resumed operations and began striking Silver Morgan Dollars. The New Orleans Mint issued Morgans each year from 1879 to 1904, missing only the first year in 1878 and the final year in 1921.

The obverse side of 2021 (P) O Privy Silver Morgan Dollars comes with a left-profile portrait of Liberty. She is shown wearing a Phrygian cap on her head with most of her hair held up underneath the cap. Just a few strands of hair curl down her neck as the coronet and wreath crowns rest on her head.

On the reverse face of 2021 O Privy Silver Morgan Dollars is a 19th-century iteration of the heraldic eagle. This design was also created by Morgan and features a front-facing bald eagle using its talons to clutch the arrows of war and the olive branch of peace.

These 2021 (P) O Privy Silver Morgan Dollars are encapsulated and set within black US Mint presentation boxes. Each coin comes with a Certificate of Authenticity from the US Mint. Although struck by the Philadelphia Mint, these coins have commemorative “O” mint marks in honor of the New Orleans Mint.

Silver.com customer service can assist you on the phone at 888-989-7223. Alternatively, you can reach out to us on the web through our live chat and email address features.