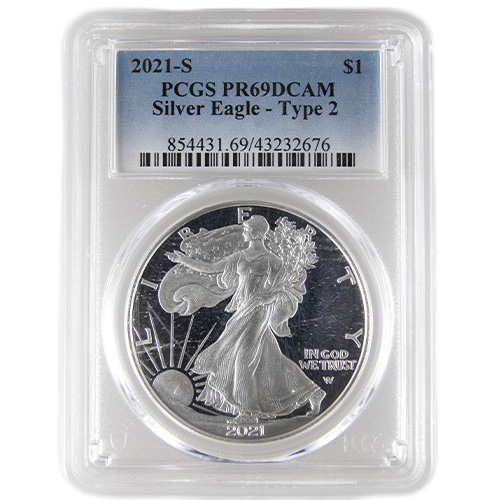 In 2021, the United States Mint celebrated the 35th anniversary of the series with the introduction of a new design element. The release schedule included Type 1 coins through the first half of the year with the original John Mercanti reverse, while Type 2 coins were released in July with the new design from Emily Damstra. While the BU and W-Proof Silver Eagles were issued in the Type 1 version, the S-Proof and Burnished Silver Eagles did not debut in 2021 until the release of the new Type 2 design.

The obverse of the 2021-S 1 oz Proof Silver American Eagle comes with the historic Walking Liberty design. This left-profile relief shows Liberty striding toward the sun as it rises over a mountain on the horizon. On the reverse of 2021-S Proof Silver Eagles is the new image of an American bald eagle in flight.

These 2021-S 1 oz Proof Silver American Eagles are available to you in near-perfect condition. PR69 coins showcase full, original mint luster with no more than two minor detractions. Examples of acceptable flaws include only minuscule contact marks or hairlines that are located outside the primary focal points of the coin. The DCAM label indicates a specimen with strong, frosted designs and deeply-mirrored, clear fields.