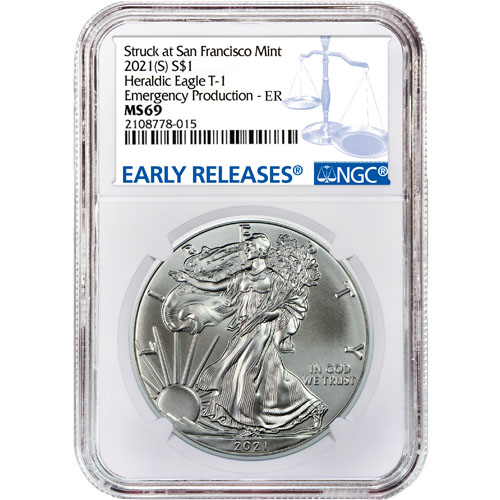 The United States Mint produces its Silver Eagle BU coins on an annual basis at the West Point Mint. As of 2001, the West Point Mint has been the primary center for the production of these coins. Since 2011, small batches of BU Silver Eagles have been produced at the San Francisco Mint when additional supplies of the coin are required to meet surging demand. Today, 2021 (S) 1 oz Silver American Eagles are available to you in near-perfect condition online at Silver.com.

From 1986 to 1998, the San Francisco Mint was responsible for the production of BU Silver Eagles for investors. The coin program shifted to the Philadelphia Mint for the 1999-2000 releases, and again moved to the West Point Mint in 2001 and remains there annually. However, the surge in demand the series has seen in the years during and after the Great Recession resulted in the San Francisco Mint beginning supplemental coining in 2011 as needed to meet demand.

All of these 2021 (S) 1 oz Silver American Eagles are available to you for purchase in near-perfect condition. The NGC assigns a Mint State 69 certification to coins that have full, original mint luster with no more than two minor detracting flaws. Acceptable flaws at this level include only minuscule contact marks or hairlines and are limited to the areas outside of the primary focal points of the coin. The Early Release label identifies a coin that was received by the NGC inside the first 30 days following the US Mint’s initial release of the coins.

On the obverse of 2021 (S) Silver American Eagles is Walking Liberty. Created in 1916 by Adolph A. Weinman, this vision of Liberty first featured on the half dollar from 1916 to 1947. It was modernized for this coin series in 1986 and continues to feature on the obverse as the primary design of the coin.

The reverse field of 2021 (S) 1 oz Silver Eagles features the heraldic eagle design for the final time in the series. The heraldic eagle features a bald eagle in front-facing relief as it clutches the arrows of war and the olive branch of peace in its talons. There is also a triangular cluster of 13 stars over its head.

These are the final (S) Silver American Eagle BU coins that will feature the heraldic eagle on the obverse. For the 35th anniversary of the series, the US Mint is unveiling a new reverse design of the bald eagle that will rollout on 2021-dated coins starting midyear 2021.

Please contact Silver.com with any questions. Our team is available to assist you with questions at 888-989-7223, online using our live chat, and via our email address.