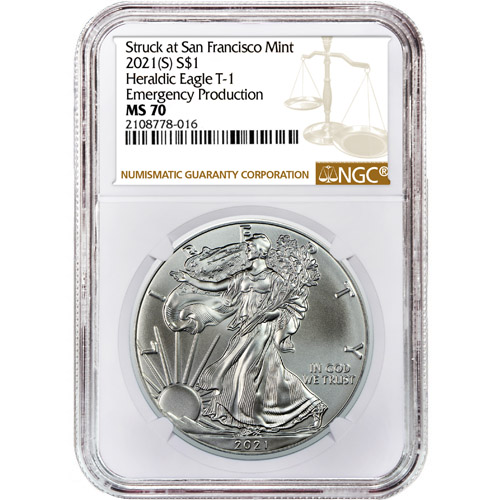 The United States Mint issues the Silver American Eagles from the West Point Mint branch facility. Though this has been the case since 2001, when demand begins to surge beyond the capacity of West Point, the US Mint has a plan in place to continue meeting demand. As of 2011, it has turned to the San Francisco Mint to again strike Silver Eagles to provide supplemental support. Now, 2021 (S) 1 oz Silver American Eagles in perfect condition are available to you for purchase online at Silver.com.

In 2001, the West Point Mint took over coining the Silver Eagles and continues to strike the coins to this day. In the midst of the Great Recession in 2011, with demand for the coins surging, the US Mint again turned to the San Francisco Mint. When demand surges, the San Francisco Mint strikes Silver Eagles. The coins have no mint marks identifying the point of origin, but the serial numbers and straps on the Monster Boxes the mint ships the coins in help to identify San Francisco as the point of origin.

The obverse field of 2021 (S) 1 oz Silver American Eagles depicts the Walking Liberty image. Created by Adolph A. Weinman in 1916, the design is believed to be inspired by the French “sower” coin design. It depicts Liberty walking toward the sun on the horizon with her right hand outstretched and her left hand carrying branches of oak and laurel. The American flag is draped over her shoulders as the sun rises over a mountain in the distance.

On the reverse side of 2021 (S) Silver Eagles is the heraldic eagle. Featuring for the last time in the series, the heraldic eagle depicts a bald eagle with its wings flexed out to the sides as it supports the US national shield.

These 2021 (S) 1 oz Silver American Eagles are available in perfect condition. Mint State 70 coins showcase full, original mint luster and bear no detracting flaws of any kind on the design elements or fields of the coin.

Silver.com customer service is available to assist you at 888-989-7223. Additionally, you can chat with us live online or simply send us an email.