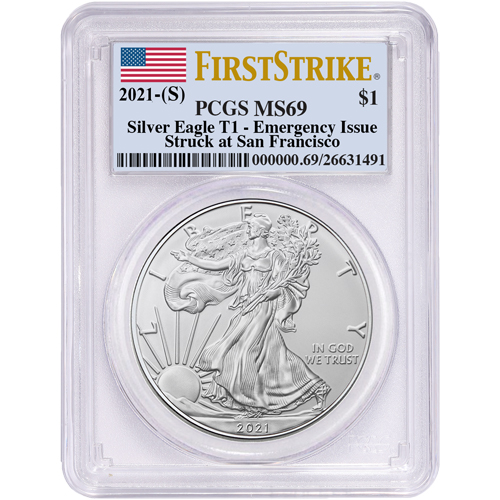 The 1 oz silver coin in the American Eagle Series is the world’s hottest silver coin. With a record single-year mintage of 47 million coins in 2015, the Silver Eagle has established itself over the past decade as the most sought-out coin among investors. When economic turmoil strikes, it is the Silver Eagle that buyers trust. Now, 2021 (S) 1 oz Silver American Eagles in near-perfect condition are available to you for purchase online at Silver.com.

In 1999, the Philadelphia Mint took over for two years before the coining of the Silver Eagle passed on to the West Point Mint. Since 2001, the West Point branch facility has been responsible for coining the Silver Eagle. However, in 2011, the San Francisco Mint was stood up again to provide supplemental coining. Specimens struck by the San Francisco Mint are only identifiable as such by the serial numbers and straps on the Monster Boxes the coins ship in from the mint.

On the obverse of these 2021 (S) 1 oz Silver American Eagles is the Walking Liberty design from Adolph A. Weinman. Created in 1916, it shows Liberty walking in left-profile relief toward the sun on the horizon.

These 2021 (S) 1 oz Silver American Eagles are near-perfect specimens. A Mint State 69 coin showcases full, original mint luster and a maximum of two minor detracting flaws. Examples of those flaws include only minuscule contact marks or hairlines. Each of these flaws must be located outside of the primary focal points of the coin. The assigning of a First Strike label is reserved for coins received for grading within 30 days of the initial release from the US Mint.

Silver.com customer service is happy to assist you with any questions on the phone at 888-989-7223. We are also available to you online through our live chat and email address features.