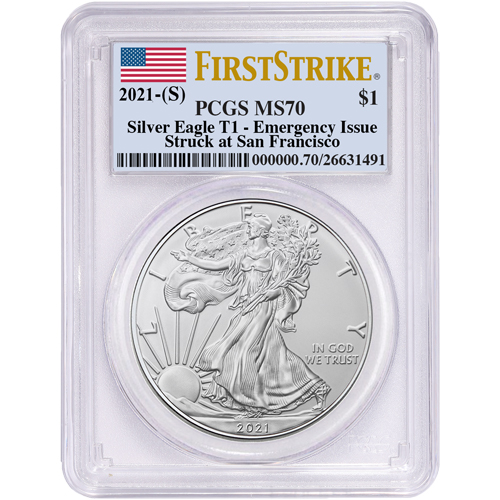 Silver American Eagles are the most populous silver coins in the world right now. With millions of these coins struck each year for investors, the Silver Eagle is one of the first items that investors seek out when looking to build upon their silver holdings. As a result, the Silver Eagle is also one of the most common coins graded by the PCGS and NGC. Despite its volume in the market, certified perfect coins are still a relative rarity in this series. Right now, 2021 (S) 1 oz Silver American Eagles are available to purchase online at Silver.com in perfect condition.

Each 2021 (S) 1 oz Silver American Eagle listed here comes in perfect condition. A Mint State 70 coin exhibits full, original mint luster with no detracting flaws present on the design element or surface areas of the coin. A First Strike label indicates a specimen that was received by the PCGS for grading within the first 30 days following its initial release from the US Mint.

From 1986 to 1998, the San Francisco Mint was the branch mint responsible for the production of 1 oz Silver Eagles. From 1999 to 2000, it was the Philadelphia Mint’s job to issue the coins. Since 2001, the West Point Mint has been the branch mint of choice for production. Starting in 2011, however, the San Francisco Mint began offering supplemental assistance to the West Point Mint as needed to help meet intense demand. Each year since has seen batches of Silver Eagles issued by San Francisco. The coins are identifiable as such by the serial numbers and mint straps on the Monster Boxes the coins ship from the mint in. None of these coins have an “S” mint mark.

The obverse side of 2021 (S) Silver American Eagles bears the image of Walking Liberty. Designed in 1916 by Adolph A. Weinman, this image depicts Liberty in left-profile relief walking toward the sun on the horizon.

On the reverse field of 2021 (S) 1 oz Silver Eagles, the heraldic eagle emblem makes its final appearance in the series. Set to be replaced with a new eagle design in mid-2021, John Mercanti’s powerful 1986 design depicts the eagle in front-facing relief as it supports the US national shield. The bird clutches the olive branch of peace and the arrows of war, with a cluster of 13 stars over its head.

If you have any questions, Silver.com is happy to help. Just give us a call at 888-989-7223, chat with us live online, or simply send us an email with your inquiries.