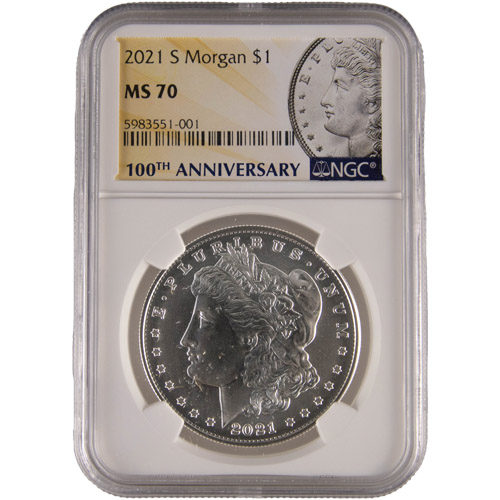 To celebrate the centennial release of the Silver Morgan Dollar Coin in 2021, coins have been issued to honor all five original mints that have struck this coin in the past. Although this coin series first became available in the years spanning 1878 to 1904, production of these coins was paused for a little under two decades before restarting again in 1921. This coin listing was struck by the United States Mint San Francisco branch. The 2021-S Silver Morgan Dollar Coin NGC MS70 is now available to be purchased from Silver.com.

The 2021-S Silver Morgan Dollar Coin NGC MS70 was struck by the San Francisco Mint but has no mint marking on either side of the coin. This centennial coin for 2021 has received a grading of MS70 from the NGC, meaning the coin is considered perfect, contains no flaws, and has its full, original mint luster. When you order from this listing at Silver.com, each coin will ship to you packaged individually in protective plastic slabs.

The San Francisco Mint is one of the two branches of the United States Mint that has manufactured and distributed Morgan Dollar coins each year they’ve been available for production. The San Francisco Mint initially opened in 1854 and was one of the branches that released this coin from 1878 to 1904, and then again when production restarted in 1921. The obverse and reverse imagery of these coins help to symbolize American ideologies and values.

On the obverse of the 2021-S Silver Morgan Dollar Coin NGC MS70 is the profile of Lady Liberty. This effigy was created by George T. Morgan and shows Lady Liberty from her left side. She wears three things on her head: a Phrygian cap, a coronet crown, and a laurel wreath. Surrounding the design on the edges of the obverse are 13 stars. The release year of the coin is also shown on the obverse.

On the reverse of the 2021-S Silver Morgan Dollar Coin NGC MS70 is the heraldic eagle image designed by George T. Morgan. The American bald eagle is shown from the front and clutches two items: an olive branch to symbolize peace and arrows to symbolize war. There’s a wreath of laurel and oak that frames the eagle from the bottom.

If you have any questions, please reach out to our customer service team at Silver.com. We can be contacted via email, online live chat, or by phone at 888-989-7223.