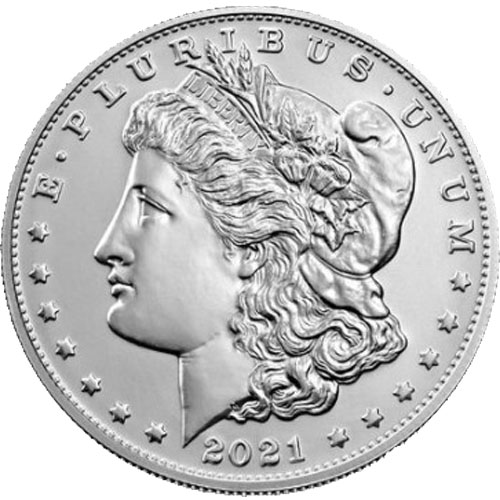 When the United States Mint began coining silver dollars for the first time after a five-year hiatus in 1878, three mints were involved in coining the newly designed Silver Morgan Dollar. The Philadelphia Mint struck the coins without a mint mark. The Carson City Mint issued the coins with “CC” mint marks and used locally-sourced silver in its production line. The San Francisco Mint also issued the coins with its “S” mint mark present. From 1878 to 1904, and again in 1921, only the Philadelphia Mint and San Francisco Mint struck coins each year.

All 2021-S Silver Morgan Dollar Coins are available to you here with protective packaging from the US Mint. Coins in this listing are housed inside capsules, set within black presentation boxes, and come with a Certificate of Authenticity.

On the obverse side of 2021-S Silver Morgan Dollars is a depiction of Lady Liberty. The left-profile relief of Liberty captures her head with a Phrygian cap, a coronet, and a wreath crown. The design also includes 13 stars.

The reverse face of 2021-S Silver Morgan Dollar Coins comes with the heraldic eagle of the United States. The design shows a front-facing bald eagle that clutches the arrows of war and the olive branch of peace in its talons.

Please contact Silver.com with any questions. Our team is available to assist you on the phone at 888-989-7223, online through our live chat, and via our email address.