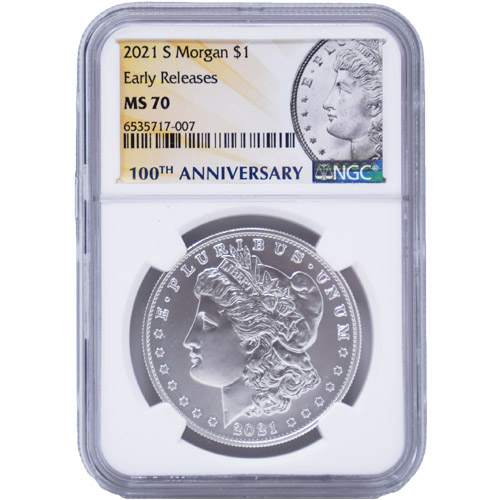 During the production history of the Silver Morgan Dollars, five mints issued the coins. These included the Philadelphia Mint, San Francisco Mint, Carson City Mint, New Orleans Mint, and Denver Mint. The San Francisco Mint was one of just two mints, alongside the Philadelphia Mint, to strike the coins every year. Its highest production year came in the final release in 1921 when San Francisco struck and issued 21.695 million Silver Morgan Dollars.

All of these 2021-S Silver Morgan Dollars come to you inside plastic slabs with a Mint State 70 certification. The NGC issues this perfect grade to coins that have full, original mint luster and no detractions of any kind present. Early Release specimens are those the NGC receives for grading within 30 days of release from the mint.

On the obverse of the 2021-S Silver Morgan Dollar Coins is a left-profile bust of Lady Liberty. Created by George T. Morgan, it features Liberty with a Phrygian cap on her head as her hair is held back by a laurel wreath and a coronet crown. This field also includes 13 stars to represent the original American colonies.

The reverse side of 2021-S Silver Morgan Dollars comes with Morgan’s depiction of the heraldic eagle of the United States. This classic design shows the bald eagle in front-facing relief with its wings spread wide and its head looking to the left of the coin field. Its talons clutch the arrows of war and the olive branch of peace.

Please feel free to contact Silver.com if you have any questions. Our team is available to you at 888-989-7223, online using our live chat, and via our email address.