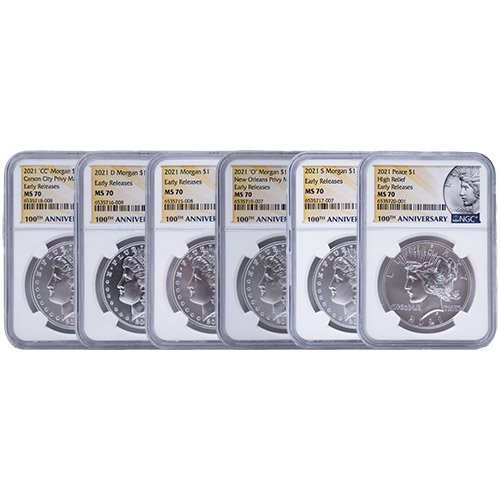 In 1878, the Silver Morgan Dollar was introduced by the United States Mint after a five-year hiatus in silver dollar coining. The coin designs were created by George T. Morgan and used on the coins through 1904 and again in 1921. The Philadelphia, San Francisco, New Orleans, Carson City, and Denver Mints all issued the coins at some point during the program’s history.

The obverse field of the 2021 Silver Morgan and Peace Dollar Coins in the 6-Coin Sets features a portrait of Liberty. The Silver Morgan has an effigy of Liberty in left-profile relief with a Phrygian cap on her head, along with a coronet and a laurel wreath. The Silver Peace coin has a Liberty effigy that shows her figure in left-profile relief, but with a tall crown and free-flowing hair.

These 2021 Silver Morgan and Peace Dollar 6-Coin Sets come to you with individual slabs and Mint State 70 certifications. Mint State 70 coins showcase full, original mint luster with no detracting flaws. Early Release specimens are those received by the NGC for grading within 30 days of release.

Actual item appearance is subject to change, but will always correlate with title and description.