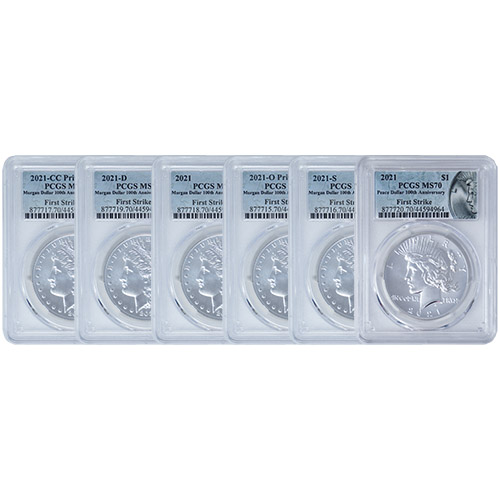 In 1921, the United States Mint brought back silver dollar production for the first time in more than a decade. When silver dollar coining resumed, the historic Morgan Dollar was put into production for most of 1921. In the final days of December 1921, the new Peace Dollar silver coin was issued. In 2021, the US Mint celebrated this important centennial with silver bullion versions of both coins. Now, 2021 Silver Morgan and Peace Dollar 6-Coin Sets in perfect condition are available to you for purchase online from Silver.com.

In 1918, Congress authorized the resumption of silver dollar coining. This began in 1921 and the US Mint initially started with the revived Morgan Dollar, but public opinion pushed the US Mint to seek out a new design reflective of 20th-century American values. By December 1921, the new Peace Dollar was ready for coining.

The obverse of 2021 Silver Morgan and Peace Dollars in this 6-Coin Set all feature left-profile portraits of Liberty. Morgan Dollars show Liberty wearing a Phrygian cap with a laurel wreath and coronet crown. Peace Dollars have an effigy of Liberty with a towering crown and free-flowing hair.

On the reverse of the coins in the 2021 Silver Morgan and Peace Dollar 6-Coin Set are images of the American bald eagle. The heraldic eagle design graces the Morgan, while a bald eagle perched on an olive branch graces the Peace.

These 2021 Silver Morgan and Peace Dollar 6-Coin Sets have individual slabs for each coin and Mint State 70 grades. Coins in this condition showcase full, original mint luster and have no flaws. First Strike coins are those received by the PCGS for grading within 30 days of release from the mint.