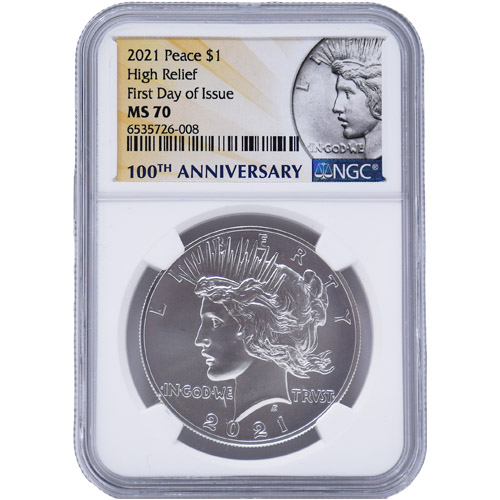 From January to December 1921, the Silver Morgan Dollar was issued by the US Mint. On December 27, 1921, the United States Mint revealed its all-new design for the US silver dollar: the Peace Dollar. With just four days left in 1921, the US Mint managed to strike just over one million of the 1921 Silver Peace Dollars.

On the reverse field of 2021 Silver Peace Dollars is a depiction of the American bald eagle. This design, just like the obverse image, was meant to reflect the desire for peace that permeated America in the years after World War I. The bald eagle shown here is perched on an olive branch with its wings resting at its side.

These 2021 Silver Peace Dollar Coins are in perfect condition with plastic slabs from the NGC. Mint State 70 coins showcase full, original mint luster with no detractions present. First Day of Issue coins are those specimens that the NGC received for certification within 24 hours of release from the mint.