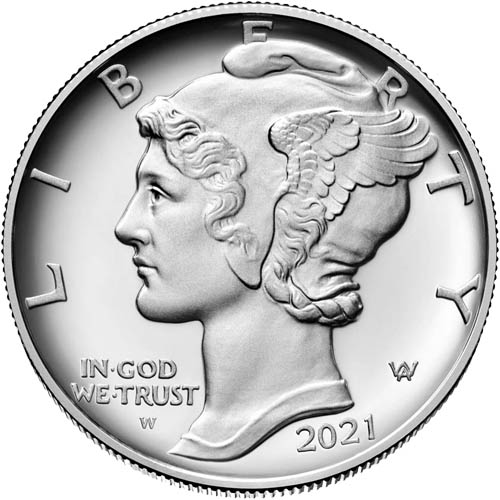 The first Palladium Eagle issued by the United States Mint was the 2017 BU specimen. The only version of the coin available that year, the BU Palladium Eagle had a debut mintage of 15,000 coins. It is the only coin, to date, in the series that does not have a mint mark present.

Obverse designs on the 2021 1 oz Proof Palladium American Eagle include the effigy of Lady Liberty. This historic design comes from the Mercury Dime, a circulation piece issued in the United States from 1916 to 1945. Adolph A. Weinman created the design in 1916 and depicted Liberty in left-profile relief wearing a winged Phrygian cap. Her likeness resembles that of the Roman messenger god Mercury and resulted in Americans referring to the coin as the Mercury Dime, rather than its official title as the Winged Liberty Dime.

Reverse images on 2021 Proof Palladium Eagles include the American bald eagle and a cliff edge. The bird is perched at the edge of the cliff and grasps a small sapling in its talons. This design was also created by Weinman and was originally used on the 1907 American Institute of Architects medal.

These 2021 1 oz Proof Palladium American Eagles are available with protective capsules around the coins. The coin is set within a gray leatherette box from the mint that boasts a satin lining on the interior. The box ships with an outer sleeve from the United States Mint and comes with a Certificate of Authenticity.

Silver.com customer service is available to assist you at 888-989-7223 with any questions. Our team is also available online using our live chat and email address features.