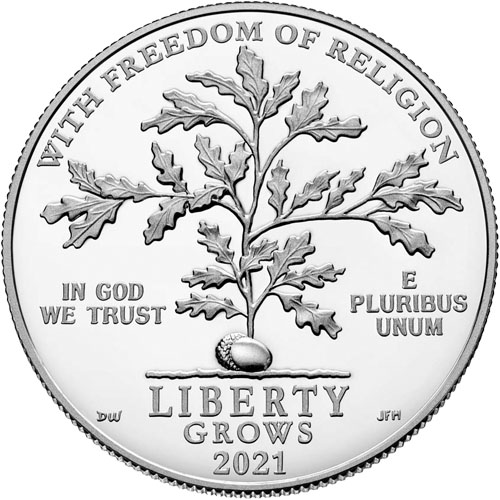 The United States Mint has used its Proof Platinum Eagle Series as a stunning collectible series that stands out among all the American Eagle variants with its new designs each year. Though the coins initially featured a stable obverse design with changing reverse visuals, as of 2018 the collection has changed to use a stable reverse image of the American bald eagle with new obverse images each year. The latest collection to debut is the five-coin First Amendment to the United States Constitution Series starting in 2021. Now, 2021-W 1 oz Proof Platinum American Eagles are available to you for purchase online at Silver.com.

The United States Mint first issued the Platinum Eagles in 1997. While the BU Platinum Eagle has maintained the same obverse and reverse images since that time, the Proof Platinum Eagle has come with new designs in almost every year. The only repeated designs were the obverse-reverse combination from 1997, the debut year, and 2017, the 20th anniversary. The 2017 date mark shared the same design of Liberty and the soaring American eagle as a result of the 20th anniversary.

Over the course of time, the US Mint has gone through five design collections. The Vistas of Liberty was the first in 1998-2002. The others included the Foundations of Democracy (2006-2008), the Preamble to the Constitution (2009-2014), the Torches of Liberty (2015-2016), and the Preamble to the Declaration of Independence (2018-2020). The latest series to debut is the new First Amendment to the United States Constitution Series, a five-coin release that will run through 2025 with new obverse designs of the Liberty tree.

The Liberty tree is found in the obverse design of 2021-W 1 oz Proof Platinum American Eagles. Created by Donna Weaver, the image shows a small acorn on the ground that marks the start of the growth and eventual maturity of the tree through the freedoms guaranteed to Americans by the First Amendment.

An American bald eagle is depicted in the reverse design of the new 2021-W 1 oz Proof Platinum Eagle. This design is the new static reverse design that has been in place since 2018 and was designed by Patricia Lucas-Morris for the Preamble to the Declaration of Independence series.

These 2021-W 1 oz Proof Platinum American Eagles are available with a protective capsule for the coin and a black display box. The box features an outer shipper with the obverse artwork present. All coins come with a Certificate of Authenticity.

Silver.com customer service is available to assist you at 888-989-7223. You can also contact us online using our live chat or by simply sending us an email.