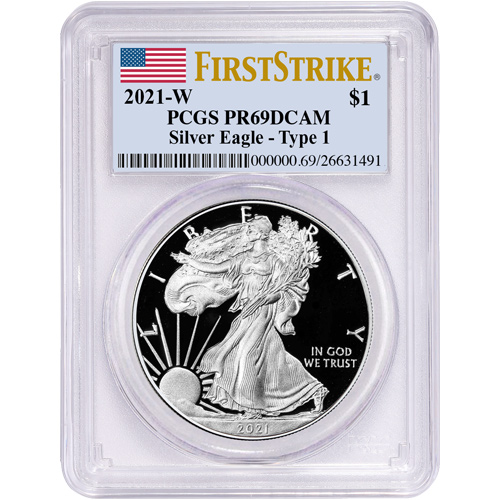 The coins of the Silver American Eagle Series are popular with both investors and collectors. With a static design that does not change annually, the Silver Eagle makes a great investment option or collectible piece for those who covet beautiful visuals on silver bullion. The Silver Eagle BU coin is not only the best-selling silver coin, but its Proof Silver Eagle counterpart is also one of the best-selling collectible coins. Now, 2021-W 1 oz Proof Silver American Eagles in near-perfect condition are available to you for purchase online at Silver.com.

Proof Silver Eagles have one of the highest mintage figures you’ll find among collectible coins. The highest recorded mintage in the series remains the 1986 debut release of the Proof Silver Eagle with its mintage of 1.4 million coins. The next closest coin is some 400,000 coins short of that mark, with the 2006 20th-anniversary coin being the only other to cross the 1-million coin mark.

Walking Liberty features on the obverse of 2021-W 1 oz Proof Silver American Eagles. Adolph A. Weinman’s depiction of Liberty walking toward the sun includes her figure wearing a Phrygian cap with the American flag draped around her figure.

The heraldic eagle of the United States is visible in the reverse design of 2021-W Proof Silver Eagles. This is the final date mark that will carry the heraldic eagle, a symbol of the federal government that features a bald eagle with the US national shield on its chest.

These 2021-W 1 oz Proof Silver American Eagles are available to you with a PR69 certification. Considered near-perfect specimens, these coins showcase full, original mint luster. You will also notice a maximum of two minor detracting flaws that are limited to minuscule contact marks or hairlines only. These flaws must be outside the primary focal points.

The coins also have DCAM and First Strike labels. DCAM stands for deep-cameo and refers to the strong, frosted designs overlaying deeply-mirrored, clear backgrounds. First Strike means the PCGS received the coins from the US Mint for grading within the initial 30-day window after release.

Silver.com customer service can assist you with questions at 888-989-7223. Alternatively, you can contact us online by using our live chat or simply sending us an email.