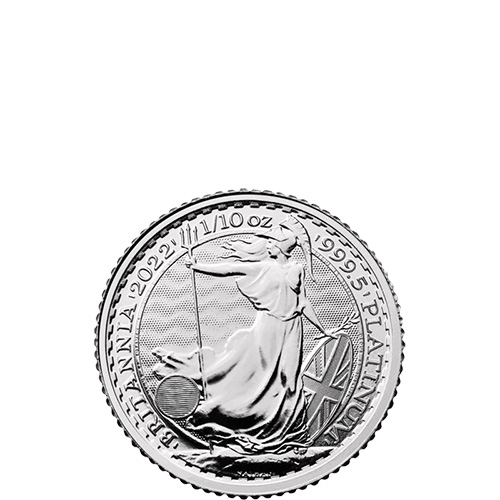 Many of the world’s most popular bullion coin programs have gold, silver, and platinum coin options as of the 21st century. Series such as the American Eagle, Canadian Maple Leaf, Austrian Philharmonic, and Australian Kangaroo all offer investors options across these three major precious metals. As of 2018, the same is true of the British Britannia. Right now, 2022 1/10 oz Platinum British Britannias are available to purchase online from Silver.com.

Each of the 2022 1/10 oz Platinum British Britannias in this product listing comes to you inside individual protective flips. When purchasing multiples, you will receive either plastic tubes of 25 coins or Monster Boxes of 500 coins. The Monster Box contains 20 individual tubes of 25 coins each. All coins are in Brilliant Uncirculated condition.

The British Britannia Series is an annual bullion release on par with other major collections such as the American Eagle, Canadian Maple Leaf, and Australian Kangaroo, just to name a few. The series started with only gold bullion coins in 1987. In 1997, silver bullion coins were introduced. In 2018, these Platinum Britannias debuted. All coins in the series share the same obverse and reverse designs each year.

The obverse field of 2022 British Platinum Britannias features the latest effigy of Queen Elizabeth II to feature on British coins. This visual shows Her Majesty, Queen Elizabeth II, in right-profile relief. Designed in 2015 by Jody Clark, this design shows the Queen at the age of 89 wearing the George IV State Diadem Crown.

On the reverse side of 2022 1/10 oz Platinum Britannias is the imposing visual of Britannia. The female allegorical figure is shown here standing along the coast with a shield in her left hand, a trident in her right hand, and a Corinthian helmet on her head. This design was created for the series in 1987 by Philip Nathan.

If you have any questions about these platinum coins, please feel free to ask. Silver.com customer service is available to you at 888-989-7223, online using our live chat, and via our email address.