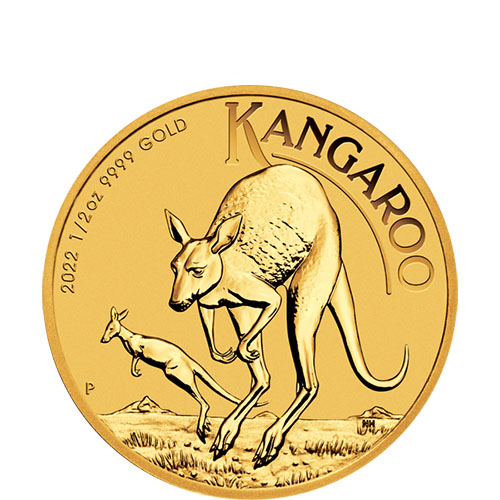 With the 1986 introduction of the Gold Nugget Series, Perth Mint had the foundation available to it that would later be used to introduce the Gold Kangaroo Series. After just three releases of the Gold Nugget franchise, the collection was rebranded by Perth Mint as the Gold Kangaroo in 1990 alongside the debut of the Silver Kookaburra, giving the mint the first two coins in what would prove to be many follow-up releases featuring native wildlife from Australia. Today, 2022 1/2 oz Gold Australian Kangaroos are available to you online at Silver.com.

Perth Mint began selling the first coins in what is now the Gold Kangaroo Series in late 1986. These coins were 1987-dated specimens and known at the time as the Gold Nugget Series. The coins initially featured a different image of a gold nugget that had actually been discovered in Australia in the past on the reverse fields. While the modern Gold Kangaroo has a new image of the kangaroo species on the reverse of each coin each year, the historic Gold Nugget Series featured a different gold nugget on each weight, but used the same design each year.

All of these 2022 1/2 oz Gold Australian Kangaroos are available to you inside plastic capsules for shipping. Each coin comes in Brilliant Uncirculated condition and the 1/2 oz weight has a limited mintage for the year of 100,000 coins. Perth Mint will strike the coins to meet demand until it reaches that cap. Recent sales suggest the mint may not reach that level though, as sales of the 1/2 oz gold coin have been dropping in recent years from 19,868 in 2018 to just 10,043 coins in 2020.

On the obverse of 2022 Gold Australian Kangaroos is a depiction of Queen Elizabeth II. England’s longest-reigning monarch, Her Majesty holds not only the title of Queen of England and the Commonwealth, but as the sovereign head of Australia, she is considered the Queen of Australia as well. This effigy is the sixth-generation portrait of the Queen to grace Australian coins and it was designed in 2015 by Jody Clark.

The reverse side of 2022 1/2 oz Gold Kangaroos features an image of a small kangaroo family unit. Here, a mother and its young joey are shown hopping along a grassy plain with hillocks, or small hills, on the horizon in the distance.

Please contact Silver.com if you have any questions about gold for sale. Our team can assist you at 888-989-7223, online using our live chat, and via our email address.