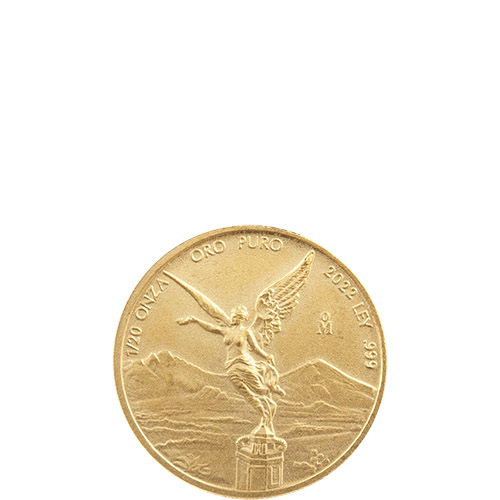 The Gold Libertads from the Mexican Mint come with five weights each year. As of 1991, the series has offered 1 oz, 1/2 oz, 1/4 oz, 1/10 oz, and 1/20 oz gold coins. The series was introduced in 1981 with only three weights, but when it resumed in 1991, all five weights were available and have largely been issued as such since then. Right now, 2022 1/20 oz Gold Mexican Libertads are available to purchase online at Silver.com.

Each of the 2022 1/20 oz Gold Mexican Libertads offered here comes in Brilliant Uncirculated condition. The coins come with protective plastic flips for delivery and present one of the highest mintages in the series. The 1/20 oz gold coin set a mintage record in 1992 with total sales of 63,858 coins. This remains the highest to date.

The obverse of 2022 Gold Mexican Libertads comes with the modern coat of arms of Mexico. In this design, the Mexican golden eagle is featured in left-profile relief as it raises its wings behind its figure. The eagle is perched on a prickly pear cactus and uses its talons, as well as its beak, to devour a snake.

On the reverse side of the 2022 1/20 oz Gold Libertad, you will find the statue of Winged Victory. This statue was sculpted in 1910 to honor the 100th anniversary of the start of the Mexican independence movement. In 1921, upon the completion of the Mexican Independence Victory Column, the statue was moved to the top of the monument to watch out over Mexico City.

If you have any questions when you buy gold, please feel free to ask. Our team is available to assist you at 888-989-7226, online using our live chat, and via our email address.