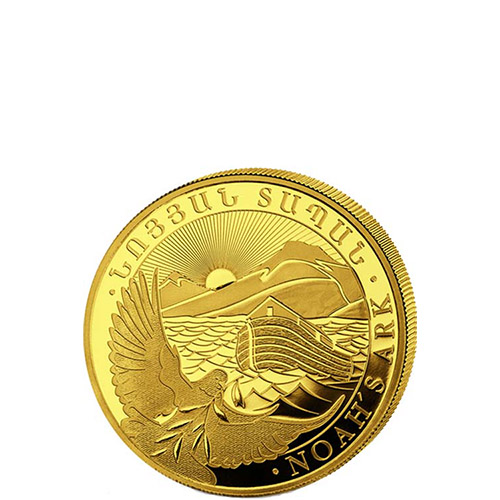 In 2020, Geiger Edelmetalle expanded the Armenian Noah’s Ark bullion coin series for the first time in eight years. The last expansion of the series occurred in 2012, just one year after its debut, and capitalized on the popularity of silver during a period of record-high silver prices. In 2020, with both gold and silver skyrocketing again, the German mint introduced the first-ever gold coins for sale in the Armenian Noah’s Ark Series. Right now, 2022 1/4 oz Gold Armenian Noah’s Ark Coins are available to purchase online at Silver.com.

Each 2022 1/4 oz Gold Armenian Noah’s Ark Coin available in this listing at Silver.com comes with a security capsule from Geiger Edelmetalle. The coins in the gold range are offered inside security capsules that can only be opened by destroying the capsule itself. The Certificate of Authenticity features all of the authenticating details of the coin, including a unique serial number in the release and the signatures of both the Governor of the Central Bank of the Republic of Armenia and the mint director.

On the obverse side of 2022 Gold Armenian Noah’s Ark Coins is the Armenian coat of arms. This seal was adopted in the 1990s by the Republic of Armenia, but it is connected to several centuries worth of Armenian history, with heraldic beasts dating to the period of the ancient Kingdom of Armenia to more recent heraldic symbols from its Soviet-influenced era.

The reverse face of the 2022 1/4 oz Gold Noah’s Ark Coin features a depiction of Noah’s ark. In this beautifully detailed design, the ark glides along the floodwaters as the sun rises to greet a new day over the peak of Mount Ararat in the distance. In the foreground, a dove returns to the ark with good news in its beak. It has found an olive branch, a symbol that dry land must be nearby.