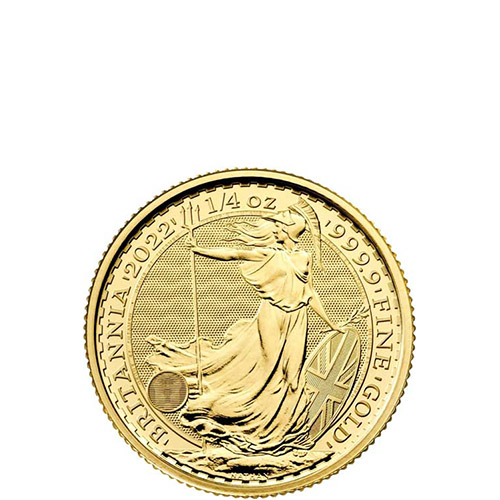 One of the oldest design concepts still in use today on modern bullion coins is the female personification of Britain. Known as Britannia, her figure has been associated with the British Isles and Britons since the Roman Empire first invaded England in hopes of subduing and conquering all of the British Isles. Since the late 17th century, she has been a fixture of British currency design. Now, 2022 1/4 oz Gold British Britannias are available to you for purchase online from Silver.com.

In 2021, the Royal Mint enhanced the security of its Gold Britannias with the introduction of four new elements on the reverse side of the coin. Three of these features are instantly noticeable on the reverse side of the coins. In the background field, the Royal Mint offers texture lines that create the illusion of motion in the waves of the ocean.

Britannia’s shield with the Union Jack now has tincture lines throughout the stripes of the flag. There is also a latent security image on this side that changes between a locked padlock and the trident head of Britannia as you adjust your viewing angle. The harder-to-spot security element is the micro-text engraving around the inner rim around Britannia.

The obverse of 2022 1/4 oz Gold British Britannias features a right-profile portrait of Queen Elizabeth II. This depiction of the Queen was created in 2015 by Jody Clark as the fifth-generation effigy of the Queen for British coins. It shows the Queen at the age of 89 with the George IV State Diadem and is set against a background field with a guilloche effect.

On the reverse of the 2022 1/4 oz Gold Britannia is a depiction of Britannia. Designed in 1987 by Philip Nathan, the vision shows Britannia in a gown on a small patch of land. While she wields a trident in her right hand, she also holds an olive branch in her left hand as it rests on her shield.

These 2022 1/4 oz Gold British Britannias are available to you in Brilliant Uncirculated condition. Coins in this weight will ship either individually in protective flips or by multiples of 25 coins in plastic tubes.

Silver.com customer service is available to answer your questions when buying gold at 888-989-7223. Alternatively, you can chat with us live online or simply send us an email.