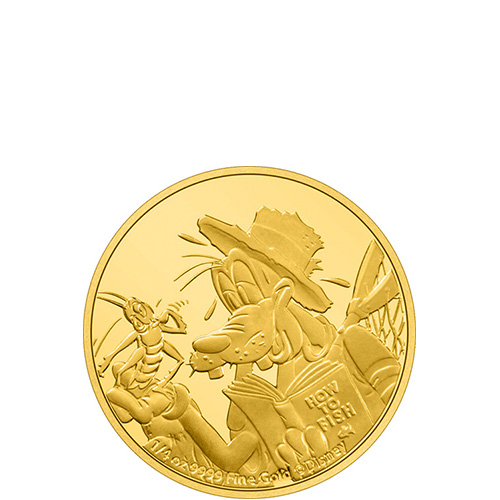 First known as Dippy Dawg, Goofy made his debut as a Disney character in 1932. He went on to become one of the most famous members of the studio’s core cast, with an iconic run as a part of a comedic trio with Mickey Mouse and Donald Duck, a pair of Oscar nominations and a long track record in television and comics across decades. The New Zealand Mint celebrates this extraordinary career with the 2022 1/4 oz Gold Proof Niue Disney Goofy 90th Anniversary Coin, now available from Silver.com.

The 2022 Gold Proof Niue Disney Goofy 90th Anniversary Coin offers high-relief medallic artwork against brilliant mirrored backgrounds, the signature features of a proof-quality collectible. It comes ready to display in a Goofy-themed coin case nestled in velvet, along with a Certificate of Authenticity that identifies your coin’s unique number in this exclusive mintage. It’s a good idea to order early to ensure access to the very limited worldwide supply.

Goofy was a major phenomenon in the Disney lineup throughout his long career and remains one of the most famous of all animated characters to this day. Sharing the limelight with Donald Duck and Mickey Mouse in the early days, Goofy has since appeared in a wide variety of media — even including video games — has several times had his own shows and has appeared in some of the most famous animated shorts ever made for the big screen, including the Oscar-nominated How to Play Football.

This iconic animated comedy hero is featured on the coin’s reverse side along with a grasshopper friend named Wilbur, as seen in the appropriately-named cartoon Goofy and Wilbur. Inscriptions at the coin’s rim verify its gold contents and show Disney’s copyright.

On the obverse, Queen Elizabeth II appears in a famous official effigy that identifies the coin as legal tender. Her image is accompanied by the inscriptions “Queen Elizabeth II,” “Niue,” “25 Dollars” and “2022.”

For more information about these gold coins for sale, contact the team at Silver.com. You can phone us at 888-989-7224, chat with us live online or send questions to our e-mail address.