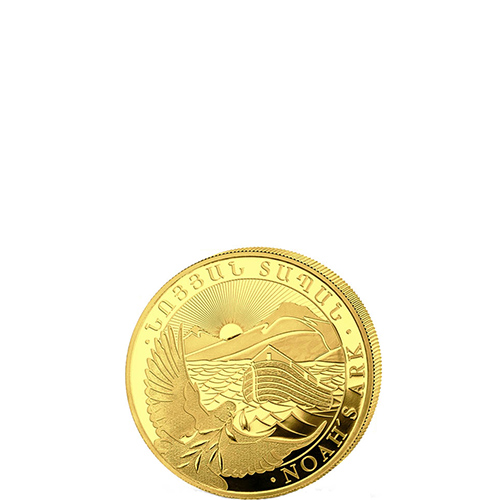 The Armenian Noah’s Ark Series is a collection of legal tender bullion coins that first debuted in 2011. The series is produced in Germany by Geiger Edelmetalle with the authorization of the Central Bank of the Republic of Armenia. In fact, all coins in the series are individually packaged with a Certificate of Authenticity verifying the role of the Central Bank in authorizing the coins. Now, 2022 1 Gram Gold Armenian Noah’s Ark Coins are available to you for purchase online from Silver.com.

In 2011, Geiger Edelmetalle issued the first coins in the Noah’s Ark Series. That year featured 1/4 oz, 1/2 oz, and 1 oz silver coins authorized by the Central Bank of the Republic of Armenia. One year later, the mint expanded the series with stunning 5 oz, 10 oz, 1 kilogram, and 5 kilogram coins.

In September 2020, the first gold bullion coins in the series were released for investors. This included a 1 oz, 1/2 oz, and 1/4 oz gold coin offered alongside this 1 Gram option. Each coin in the gold series is individually packaged and comes with the same designs found on the obverse and reverse of the silver coins.

The obverse of 2022 Gold Noah’s Ark Coins features the national coat of arms of the Republic of Armenia. This design features a quartered shield that is supported from behind by a heraldic eagle and by a heraldic lion. The quadrants feature varying depictions of the eagle and lion, with a smaller shield at the center depicting Noah’s ark atop Mount Ararat.

On the reverse side of 2022 1 Gram Gold Noah’s Ark Coins is the image of Noah’s ark. Featured on the coins in the Armenian Noah’s Ark Series since 2011, this visual shows the ark on the floodwaters as the rains have stopped and the sun rises over Mount Ararat in the background.

These 2022 1 Gram Gold Armenian Noah’s Ark Coins are available to you for purchase with individual security capsules. The protective capsule comes with a Certificate of Authenticity card inside and bears the signatures of both the mint director and the Governor of the Central Bank of the Republic of Armenia.