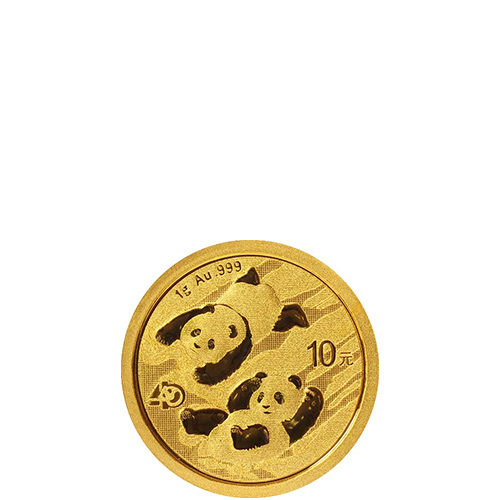 One of the most popular and enduring gold bullion coins available is the Gold Panda from the Chinese Mint. When it was introduced in 1982, the coin program was just the third of its kind behind the South African Krugerrand and the Canadian Maple Leaf. Today, the Chinese Mint celebrates the 40th anniversary of the series in 2022. Now, 2022 1 Gram Gold Chinese Panda Coins are available to you for purchase online at Silver.com.

Chinese Panda Coins consist of five gold weights and one silver coin. In 1982, the Gold Panda debuted with 1 oz, 1/2 oz, 1/4 oz, and 1/10 oz gold coins. In 1983, the mint added a 1/20 oz gold coin and introduced the first-ever Silver Panda, though the original coins were less than 1 Troy ounce proofs with .900 silver content.

The obverse of 2022 1 Gram Gold Chinese Pandas features the Hall of Prayer for Abundant Harvests. This side of the coin has never changed in the history of this series and remains consistent with its visual of the primary building in the Temple of Heaven Complex.

On the reverse side of the 2022 Gold Panda is an image of two Giant Pandas. The pandas are shown sliding down a snow-covered hill. One of the pandas is daringly sliding down the hill head-first on its stomach. The other is also throwing caution to the wind as it slides down the snowy hill on its back with all four legs in the air.

These 2022 1 Gram Gold Chinese Panda Coins are available to purchase online in individual plastic pouches. All of the coins offered in this listing come in Brilliant Uncirculated condition.

Silver.com customer service is available to assist you with questions at 888-989-7223. Alternatively, you can chat with us live online or email us directly.